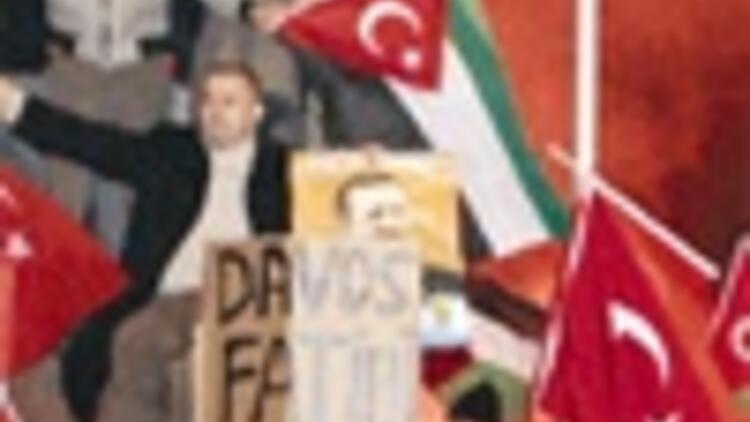 Daily Hürriyet went with the headline "Davos’ Spirit Dies." In its sub-headline, the daily went on to say that Prime Minister Erdoğan, who reacted harshly to Israeli President Peres's angry attitude, criticized the moderator for not giving him enough time and had left the panel. A caption beneath the headline made reference to moderator David Ignatius from the Washington Post stating that he was known for his closeness with the Armenian lobby and has in the past-criticized Erdoğan's policies on the Middle East.

Daily Star allocated the whole front page to the story, headlining the incident as a "Historic Ultimatum." A picture of Erdoğan dismissing President Peres with a hand gesture took up the majority of the page and a quote from Erdoğan was used as a sub-headline "When it comes to killing, you know very well how to kill."

Daily Sabah said Erdoğan had been welcomed by thousands of people at Istanbul's Atatürk Airport at 2.15 a.m.

Daily Vatan’s headline was " Peres Provoked, Erdoğan left aggressively," and went on to quote Erdoğan who spoke at a joint press conference, as saying that the Israeli president did not tell the truth in his 25-minute speech.

Conservative newspapers Yeni Şafak and Zaman also headlined the story. Yeni Şafak went with " Historic Slap," and quoted Erdoğan as saying, "Differences in religion are not important. Anti- Semitism and people and phobias against Muslims are human crimes, it does not matter what religion they are from." The daily also highlighted that Israeli President Shimon Perez had called Erdoğan and apologized for the tension that occurred in Davos during the session on Gaza. Zaman headlined the incident as "Erdoğan storms out of the panel and Peres apologizes."

Foreign coverage of the incident
The heated rhetoric of Prime Minister Recep Tayyip Erdoğan toward Israel made headlines across the world.

BBC News reported that Turkey's prime minister stormed off the stage at the World Economic Forum in Davos after a heated debate on Gaza with Israel's president. It was reported that in reaction to Erdoğans remark: "I find it very sad that people applaud what you said. You killed people. And I think that it is very wrong," Peres responded: "The tragedy of Gaza is not Israel, it is Hamas, and if rockets were fired into Istanbul you would have reacted the same."

Israeli English daily The Jerusalem Post covered the story of Erdoğan criticizing Peres and leaving Davos as one of its top headlines and described the prime minister's arrival to Istanbul as the homecoming of a hero, stating "Some outside the airport gate held banners that applauded his Palestinian stance in Davos."

Israel’s daily Haaretz highlighted Erdoğan’s statement that his anger over Gaza expressed in Davos was directed at the Israeli government, not the Jewish people. "I am very sorry for what happened and friends could sometimes have an argument between themselves," Peres told Erdogan during the telephone conversation, it was reported.