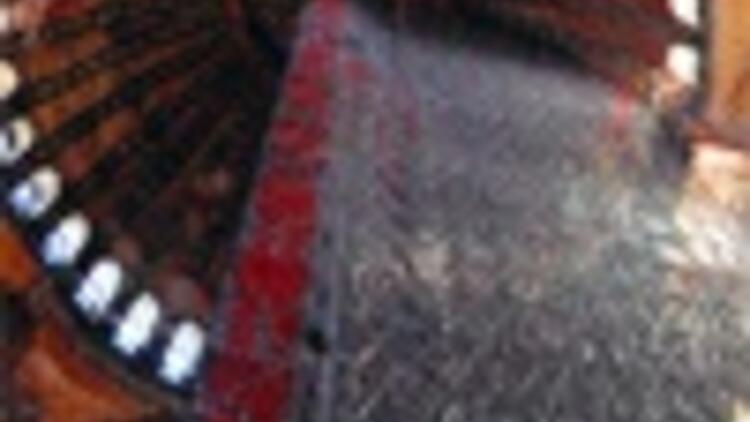 ISTANBUL - The Hagia Sophia Museum is the subject of a comprehensive restoration project, realized with the support of the Istanbul 2010 European Capital of Culture Agency. As part of the project, scaffolding, which has been under the dome of the museum for 16 years, is being removed

The latest restoration project of the Hagia Sophia is part of the extensive efforts to preserve thousands of years of history in Istanbul by the 2010 European Capital of Culture Agency.

Listed as a UNESCO World Cultural Heritage Site and also one of Istanbul’s most important historical structures, the Hagia Sophia Museum is going through a comprehensive renovation process. As part of the project, the 55-meter high scaffolding, which has been under the dome of the museum for 16 years and shadows the view of its main dome, will be removed.

Delivering the opening speech of the press conference, Çolakoğlu said they aimed to turn Istanbul into an open-air museum, with its historical and cultural riches, for future generations.

"It is a great pleasure for us that the restoration work that has been continuing for many long years at the Hagia Sophia will be completed as part of the project of the Istanbul 2010 European Capital of Culture. The first stage of the project, with a budget of nearly 1.5 million (Turkish) lira, has been undertaken with the coordination of the agency’s experts and in collaboration with the Culture and Tourism Ministry. We will continue working to make the city an unforgettable place among the capitals of culture."

Pointing out the importance of the city’s historical heritage, Culture and Tourism Minister Günay said the restoration work was started in 1993 with the support of UNESCO. He said work had been carried out in parallel with a detailed scientific research process, and added: "It is a very important step that the restoration will be finished during the process of Istanbul 2010. Millions of people who visit Istanbul in 2010 will have a chance to see this magnificent structure renewed."

’This scaffolding is our shame’
Yazıcı, who delivered a speech in the area where the scaffolding was set up, said it reached 55 meters in height and weighed 181. "As deputy prime minister, I want to state that this scaffold is our own shame. But I am very pleased that this magnificent structure will be rid of this mass of iron," he said.

Yazıcı said the 2010 European Capital of Culture Agency had been formed under a special law, adding: "One of the most important cultural values that the agency can offer is Hagia Sophia, which means ’Holy Wisdom.’ It was built in five years from 532 to 537. It is one of the greatest surviving examples of Byzantine architecture."

Yazıcı also mentioned some of the criticism directed at the agency. In response, he said: "Some press members ask ’what has the agency done for Istanbul so far?’ This is one of the most concrete projects of the agency, and we have many more things to do. There are many works to do especially at Topkapı Palace. There is also an urban transformation project for Süleymaniye."

After the speeches, removal of the 16-year-old scaffolding began. The first pieces of scaffolding were given to Yazıcı and Günay as gifts.