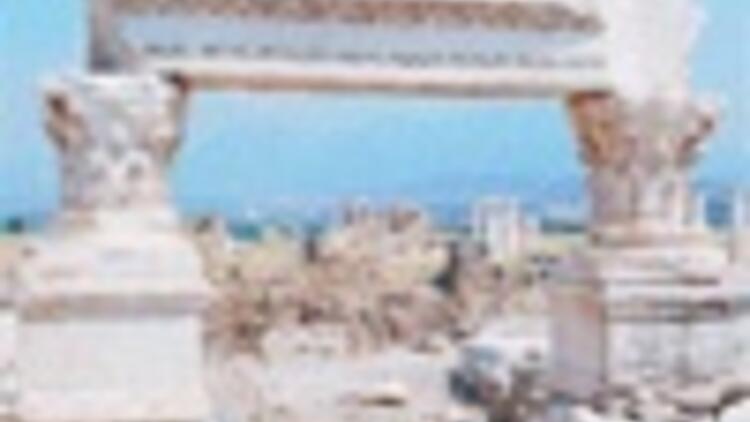 ISTANBUL - The business world and local administrations in the western province of Denizli are cooperating to unearth and protect the ancient city of Laodicea. Project leaders say the joint effort for the 2,000-year-old site, which has revealed the largest coliseum in Anatolia, is the first of its kind in Turkey and is setting an example for other cities

The ancient city of Laodicea in Denizli is being unearthed thanks to cooperation between the local authorities and businessmen, setting an example for the rest of Turkey’s cities on how to take ownership of archaeological treasures.

"Something has taken place here that is unseen in the rest of the country. The industrialists and businessmen of Denizli contributed to the Laodicea excavations in 2003-2004. This is the finest example of taking care of an ancient city," Prof. Celal Şimşek, head of the team responsible for the excavation, told the Anatolia news agency.

Local industrialists and businessmen are not the only ones lending a helping hand to the ongoing excavations that unearth new finds each day.

In fact, Denizli Municipality is in charge of the excavation of the ancient city that dates back to the third century B.C. as it provides funding for the work going on in an area experts consider archeologically very important. This, according to municipality officials, is a first in Turkey.

He said he has been working at the ancient city for seven years and that he loves the place as if it were his own child. "There was nothing here when we started working," said Şimşek, adding that they have unearthed a street, a city door and its towers, a monumental fountain, a temple, theaters, and the biggest coliseums in Anatolia. Şimşek said they have created a "living park of archaeology" through one of the longest excavations in Turkey.

"For instance, the team conducting the excavation calls us and says they do not have food for breakfast. We provide their breakfast for a month," Keçeci said. "They ask for a tool they need, and we provide it."

Denizli Municipality allocates 1.5 million to 2 million Turkish Liras per year for the excavation area. This apparently does not constitute a significant burden on the municipality. "This is not putting us in a difficult situation financially. Actually this is the most beneficial work that can be done," said Mayor Nihat Zeybekçi. He said they aim to use the ancient city for cultural activities like concerts within three or four years. "For instance, there is a huge hippodrome. We are planning to use the area while carefully protecting the site," he said. For about a year and a half, the responsibility of the excavation area is under the municipality, Zeybekçi said.

Meanwhile, archaeologist Necmi Karul from the archaeology department at Istanbul University said in principle it is positive that local administrations and municipalities take care of the site. The fact that local administrations are taking ownership of archaeological sites would enable the excavations to be less dependent on the bureaucracy of the central administration, thus providing flexibility as far as logistics and finance are concerned. Karul also warned that the income the municipality is planning to get from the historic sites should be used for preservation efforts.

Şimşek said the findings at Laodicea date back very far in history. "According to what we have learned from ancient sources and coins, the coliseums excavated from the site did not only host gladiator fights and sports events but also wild shows of bullfighting with hunchback bulls." Şimşek argued that bullfighting must have started in Anatolia and later moved to Spain. Another animal-related finding is the relief of a rooster, the symbol of Denizli. Şimşek said this is also important because now they know the Denizli rooster dates back to the ancient ages.

Also, until recently it was believed that the eggplant was brought to the old world from America in the 17th century, but Şimşek said the reliefs they discovered show that they grew in Anatolia thousands of years ago.

"This is the place where the first seeds of the European Union were planted," the professor claimed. "People came together in this region for trade and formed a union like the EU. Laodicea was the manager and coordinator of this union." There are reliefs, monumental tombs and scriptures supporting this theory, according to Şimşek. "Today’s EU is a reflection of the union of the Lycos Valley 2,200 years ago."

The site covers an area of 5 square kilometers and could be larger than the Ephesus, another ancient city near İzmir.

Şimşek said the Laodicea site features one of the first seven churches established in Anatolia, which makes it a well-known location among Christians and a destination for the pious.