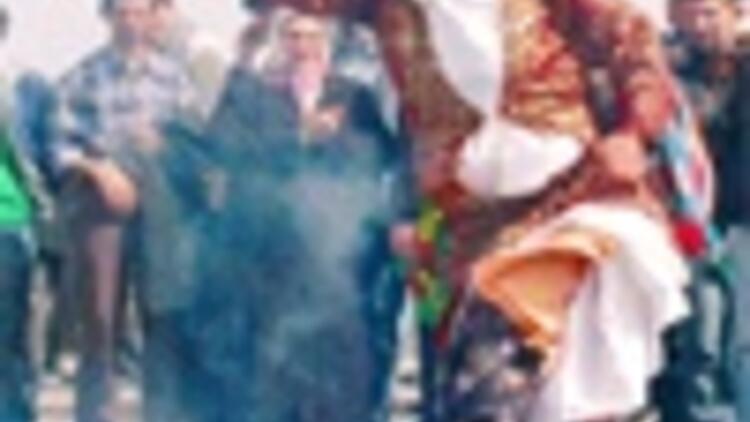 ISTANBUL - As state TV starts broadcasts on its new Kurdish language channel, promoting it as a significant achievement, Kurds want to live according to their culture. They want to show their language and culture deserves respect and pass their heritage to future generations

With the launch of a state TV channel broadcasting in Kurdish at the start of the year, Turkey’s Kurdish community sees an opportunity to protect and promote its culture through local platforms, rather than having to rely on foreign means.

The Kurdish culture has a language, a national legend, dengbej (storytellers), a cuisine, and traditional clothes. The Kurds want to protect their culture and they finally see an alternative that exists within Turkey to compete with other Kurdish channels, especially ROJ TV, a channel financed by the outlawed Kurdistan Workers’ Party, or PKK. Kurdish institutions that exist in Europe, but not in Turkey, are also in the spotlight.

The Kurds want their culture to be transferred from generation to generation, without interruption. People who support restrictions on the public expression of Kurdish culture sometimes say that Kurdish culture is poor.

Reşo Zilan, who lives in Sweden, is extremely interested in Kurdish culture and especially its literature. According to Zilan, it is pointless to argue whether or not Kurds have a rich culture. He believes every culture is rich in the time and circumstances when it exists.

"The Kurdish culture is like other neighboring cultures, Eastern, that meaning an oriental culture," said Reşo Zilan. He said the close resemblance to other nations of the East is inevitable.

He said, "In this process of merger, some similarities and common points have been created due to reciprocal influence, but this does not mean that Kurdish culture is Turkish culture or a subculture of it. That mentality can only come from denial."

Zilan said Kurds have strong oral and folk literature. "Unfortunately, prohibitions and the systematic assimilation policy since the (beginning of) the Republic viciously constricted this culture." These days Kurdish children are being alienated from their own culture through violent TV shows, Zilan said. "Today, it is not possible to find a trace of the old storytellers."

Zilan said Kurds do not lack literature, as some people claim. The roots of their written literature date back to the 11th century. He spoke about poems by the famous Baba Tahire Uryan from Hemedan, Iran, who wrote in his own local Kurdish dialect and whose works have been kept alive through the oral tradition. However, many Kurdish writers wrote and still write in popular languages instead of their mother tongue, said Zilan. He cites Yaşar Kemal, Ahmet Arif, Ruhi Su and Cahit Sıtkı Tarancı as examples from Turkey.

Zilan spoke about Jouce Blau Ñ an instructor of the Kurdish language and literature at the "Institut National des Langues Civilisations Orientales" in Paris Ñ who examines the last two decades of Kurdish writing in Sweden in her article published in the book, "Kurdish Identity and Culture."

"Approximately 300 works have been published in Sweden in the last 20 years. Mahmut Baksi, the author of ’Zozan, a Kurdish girl,’ was the first foreign member of the Swedish Writer’s Union. Another important writer, Mehmet Uzun was also in this group," he said.

Zilan said the fragmented state of the literary language of Kurds was caused by divisions between two big empires, the Ottoman and the Persian. The Erdelan Emirate, reigned between the 12th and 19th centuries, chose the Gorani dialect of Kurdish as the written language and produced a rich heritage of literature in Gorani Kurdish. Xaney? Qubadî, author of "Selawatname" and "Şîrîn û Xosrow;" Mola Bulad Xan, author of "Leylî û Mecnûn;" Ş?x Ehmed Textî Merdûxî, Mustefa B?seranî, Ehmed Begî Komasî, Muhammed Kendûleyî and Mestûre Kurdistanî, the first female historian of the Middle East, are among the pioneers of this school, Zilan said.

It was a different story with the Ottomans, as the Botan Emirate that also ruled between the 12th and 19th centuries, took the Kurmanchi dialect as its basis, Zilan said. "Madrasahs, the universities of that era, made great contributions to Kurdish culture. Elîy? Herîrî, who added wonders to our literature; Melay? Bat?yî, the writer of Mawlid in Kurdish; Melay? Cizîrî, Mevlana for the Kurds; Feqîy? Teyran, master of Kurdish lyrical literature; Ehmed? Xanî, the world famous father of Kurdish literature, and masters such as, Nizami, Fuzûlî and Rostavelli, are some of many," he said.

There are many Kurdish writers who managed to make a name for themselves and their work. Zilan said the most important writer among those was, without doubt, Ehmed? Xanî who lived at the end of the 17th century.

"He dedicated his life to science and taught at the madrasah in Doğubeyazıt that was named after him." Zilan said among his important works, the epic of "Mem û Zîn," a love story, is the most famous. This work is considered to be legendary among Kurds, and authorities compare it to "Romeo and Juliet" by William Shakespeare, Zilan said.

Kurdish clothing
Traditional Kurdish clothing was banned during the reforms in the early days of the modern Republic of Turkey, Zilan said. "This clothing no longer exists due to the pressure placed on people at the time. Most clothes that were special for specific occasions are gone. Therefore, a rich cultural and handcraft tradition was mutilated. Today, traditional clothes have become nostalgic and are usually only worn and seen at festivals," he said.

Although Kurdish society has a patriarchal structure, relations between the sexes in tribal societies were fairly decent and liberal in the past, said Zilan. "Women would not have let men trample all over them, they would make their voices heard," he said. "Society was tolerant to women stepping forward in any field. It respected and protected them. In many tribes, Kurdish women took the leadership regardless of stronger men being around, and ran the tribes successfully."

The effect of religion on women
Over time, as religious fanaticism worked its way into Kurdish society, Kurdish women lost a lot of ground. Slowly, women were pushed into confinement and closed areas. Burqas and concealing the face entered daily lives, although they were not previously among clothing traditions.

’Berdel’ not solely Kurdish
Berdel, an ancient tradition of two families exchanging brides for their respective sons, is not an act specific to Kurds, said Zilan. "This is a situation that may be considered normal only in primitive, backward, schizoid societies that rely on a strict tribal structure. This happens among certain groups of Kurds alongside some Yörük (Turkish nomads) and Turkmens," he said. With regard to honor killings, Zilan said, "I believe the increase in honor killings was related to psychosomatic reasons, caused by tough conditions of life. On the other hand I do not think it is right to only blame Kurds for honor killings," said Zilan. "For example, does it not happen among other ethnic groups in Turkey? Is it not present in the west, north and south of Anatolia? Sure it does, although not as much."