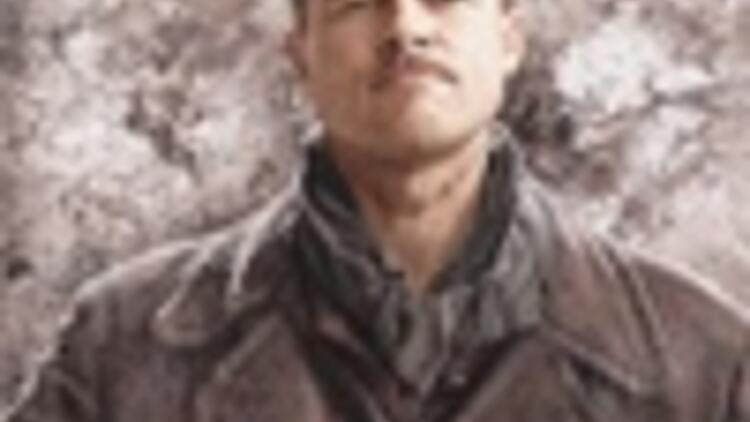 CANNES, France - Cult US director Quentin Tarantino danced his way up the red carpet Wednesday as he sent a squad of Nazi-killing 'Inglourious Basterds' into Cannes on a mission to capture the film festival's top prize.

Quentin Tarantino and Brad Pitt have spun some revisionist history on how World War II ended.

Their war saga "Inglourious Basterds" premiered Wednesday at the Cannes Film Festival, presenting a band of Jewish Allied soldiers led by Pitt who play a pivotal role in taking down the Third Reich with a strategic strike against the top Nazi brass.

"It was definitely outrageous, which I'm always game for," Pitt said of Tarantino's rewrite of the history books. The band's exploits culminate in a bloodbath at the premiere of a Nazi propaganda film in Paris as Pitt's commandos exact savage revenge for Adolf Hitler's genocide against the Jews.

"People have come up to me a lot and they've asked me, is it a fairy tale, is it a Jewish wish-fulfillment fantasy?" Tarantino said. "My characters changed the outcome of the war. Now, that didn't happen because my characters didn't exist."

Had they existed, though, the events that play out over Tarantino's two-hour, 40-minute epic are entirely plausible, Tarantino said. The movie sets the stage for Tarantino's revision of the war's end with a fairy-tale opening that reads, "Once upon a time ... in Nazi-occupied France."

For Jewish filmmaker Eli Roth ("Hostel"), whom Tarantino cast as one of Pitt's "Basterds," wish-fulfillment was not a strong enough term for the vengeance they take.

Along with Pitt, the international cast of "Inglourious Basterds" includes Diane Kruger as a German movie star and Allied operative, Daniel Bruhl as a Nazi war hero, Michael Fassbender as a British film critic turned spy, Melanie Laurent as a French Jew hiding under an assumed identity, Martin Wuttke as Hitler and Sylvester Groth as his right hand man, Joseph Goebbels.

"My parents were born in Liverpool, England, and my father was in the Royal Engineers and my mother was in the Royal Air Force," said Canadian-born Myers. "You know, those ladies that had the big maps of England, and they would go, `Jerries over Norfolk. Scramble Biggin Hill.' My mother was one of those ladies. And World War II was talked about at the table constantly. So I got a call, `Would you like to play a British general?' And I did a jig."

Tarantino came to visit Pitt last summer with the script in hand. Pitt said the two talked about movies deep into the night.

"I got up the next morning and saw five empty wine bottles laying on the floor. Five. And something that resembled a smoking apparatus. I don't know what that was all about," Pitt said. "And apparently, I agreed to do the movie, because six weeks later, I was in uniform. I was Lt. Aldo Raine."

With his heavy Southern drawl, Pitt's character becomes known as Nazi-killing terror Aldo the Apache, the mention of him and his Basterds bringing horror to the hearts of German soldiers. When he forms the band, Aldo tells his team that each one owes him 100 Nazi scalps, and they comply graphically as Tarantino incorporates scenes of the Basterds skinning the heads of their victims.

Tarantino sticks to period costumes and settings but offers his typically divergent musical backdrop, including Spaghetti Western-style music from Ennio Morricone and even David Bowie's "Cat People (Putting Out Fire)."

Debuting in theaters in late August, "Inglourious Basterds" is one of 20 films competing for the Palme d'Or, Cannes top prize, the award Tarantino won with 1994's "Pulp Fiction." His love of cinema is evident throughout as characters discuss favorite directors and spread propaganda through film. The demise of Nazi Germany itself ultimately hinges on the magic of film.
False