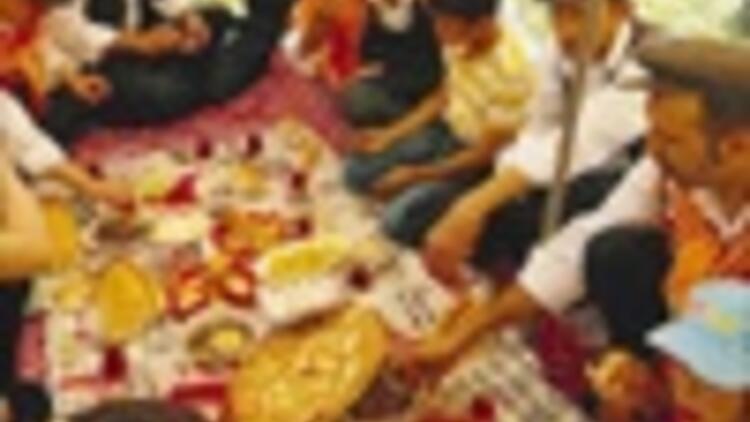 ALANYA - The Taurus Mountains are home to the oldest Turkish lifestyle. Yürüks have never given up their nomadic culture and have carried it through the centuries. Today, however, the Yürük lifestyle is eroding away and appears destined to die, only to remain in books and museums.

The "Battle of Manzikert" on Aug. 26, 1071, between the Byzantine Empire and Seljuk Turks marks the earliest Turkish accession to Anatolia. Following the victory of Alp Arslan and the capturing of Byzantine Emperor Romanos IV Diagones, the Turks gradually settled in Anatolia and eventually expanded into central Europe.

There were numerous nomadic Turkish tribes who followed Alp Arslan into Anatolia, building a new future in this beautiful and fertile land. Over the centuries, consecutive Ottoman emperors who did not feel threatened in Anatolia turned the nomadic Turks into settled communities and the nomadic Turkish lifestyle gradually adapted to the changing world. As of the 17th century, the Turks were no longer nomadic. However among these settled tribes there was another group known as the "Yürüks" who resisted changing their lifestyle.

Originating from Oghuz Turks, these people carried their remarkable nomadic culture based on seasonal exodus into the following centuries. For these people, home was where their tent was and that was how they wanted to keep on living.

Sources reckon "Yürük" originated from the Turkish word "yürümek," which means to walk. Today Yürük historians debate this definition and explain that the word "Yürük" actually means "skillful" or "contender." Yürüks have a lifestyle different than any other Turk you will meet in your daily life. However they are the main source and background of the colorful Turkish culture. Mustafa Kemal Atatürk, the founder of the modern Turkish Republic, mentioned the importance of Yürüks when he said, "Turkey will remain Turkish as long as you see smoke rising from a Yürük tent in the Taurus Mountains."

Yürüks are among the main contributors to the current Turkish country. Although their numbers are decreasing day by day, today you can find Yürüks in the eastern Mediterranean region, in central Turkey and in the Balkans.

A typical Yürük family will spend six months of a year in a particular region and the next six months at another, all in relation with the changing seasons. Their typical black tents, daily belongings and the animals that are the main inspiration for their lifestyle will move with them wherever they go. Yürüks adore animals and their affection toward them is reflected in their dances, costumes, songs, carpets and poetry.

Yürüks have an amazing diet and a unique food culture with a huge variety of dishes. Because of their diet and the life they spend in the mountains, they are among the healthiest people in the world. These people get everything they need at the heights of the mountain and it is all organic and naturally grown delicacies of Mother Nature.

A saying among the Yürüks is "never ask a Yürük his age" as most of them spend their entire life in good health. According to the Yürüks, one of the secrets of their strength is "Dolaz," a mixture made from goat’s milk, "çökelek," which is a white cheese, and "harnup pekmezi," which is a pectin jelly made from carob peas. If you are lucky enough to get a glass of ayran in a Yürük tent during the hot Mediterranean summer, you will be surprised to see how cold and refreshing it is. In the summer, Yürüks will carry snow from the heights of the mountains to keep their supplies as cold as your refrigerator at home.

Yürüks have their own understanding and acceptance of life. To reach the heights of the mountains is in their instinct and is what makes them take the most challenging lifestyle. This characteristic of the Yürüks makes them the strongest element in the history of the Turkish military as they were the ones who could cope with the toughest conditions in a battle.

Today there are about 500 families left in the Taurus Mountains who still live the traditional Yürük lifestyle. Unfortunately, not the Yürük culture but the Yürük lifestyle on the mountains is destined to die and remain in museums, culture books and festivals. Yürük families who are worried about their future are slowly settling in communities because they want their children to go to school, have a proper education and learn to use a computer.