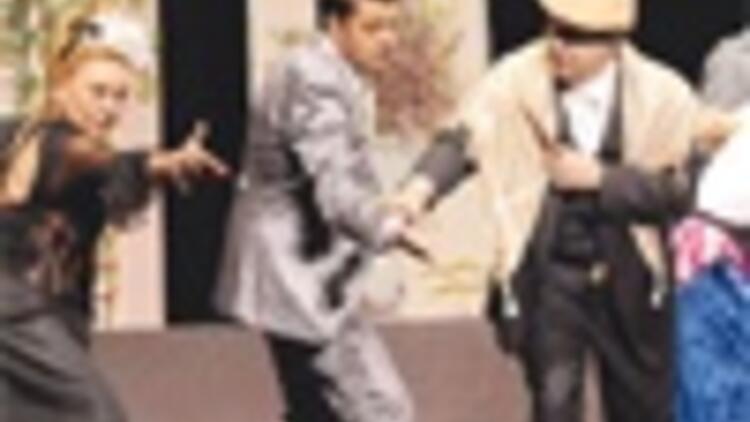 NEWYORK - 'Hisseli Harikalar Kumpanyası' (The Joint Venture Company of Wonders), which is the first Turkish musical to be staged on Broadway, drew plenty of interest from Turks as well as Americans at its weekend performance. The playwright of the play, famous Turkish theater actor Haldun Dormen was among the audience.

The first Turkish musical to be staged in the U.S, "Hisseli Harikalar Kumpanyası" (The Joint Venture Company of Wonders) played to a full house on Broadway.

The musical, which was staged at the weekend at the 3,000-capacity Beacon Theater, was highly appreciated by audiences, who gave a standing ovation to the New York Turkish-American Art Foundation artists and dancers at the end of the show. Among the viewers was famous Turkish theater actor Haldun Dormen, the playwright of the musical.

Directed by Gülçin Hatıhan and produced by İbrahim Yazıcı, the musical was choreographed by Korhan Başaran and the musical director was Onur Selçuk. The artists involved in the production included pop singer Burak Kut, Duygu Erdoğan, İbrahim Yazıcı, Uğur Uğural, Meltem Mete, Ayşe Eldek, Onur Selçuk and Karin Altın. A total of 80 artists from the foundation also took part in the musical. The main sponsor of the musical was the Washington-based Turkish Culture Foundation. The U.S. viewers were able to follow it thanks to simultaneous translation through headphones. In the end of the two-act musical, Dormen and the Turkish consul general to New York, Mehmet Samsar, took the stage and thanked the artists. "I am very excited," said Dormen, adding that he had performed in the United States many times but never on Broadway. Dormen said he had never imagined he would see his name in a play performed on Broadway, and thanked to the musical team as well as the Fenerbahçe USA Association, which contributed to the play, and U.S. actor Peter Nelson who viewed it.

Samsar presented a plaque to Dormen for viewing the play with them.

’I appreciate Burak Kut’
Speaking to Anatolia news agency, Dormen said he was very pleased with that his play was performed in New York, and said: "I am also very pleased that Kut is in the musical. I always appreciated him and have and wanted to work with him. But we have never got a chance to do something together."

"We are very happy. This is a very big theater and has so far hosted many significant names in its history. This musical has been written by one of Turkey’s biggest names in theater, Haldun Dormen. We hope to go on a U.S. tour because we want more Turkish plays to be staged on Broadway. We want the voice of Turks to be heard more," Kut said.

İbrahim Yazıcı, the producer and one of the actors in the musical, said they really enjoyed putting on the play. "It was an unbelievable atmosphere. I guess we were hungry for such shows. There are hundreds of Americans among the audience and we saw they were enjoying it, too. They came to congratulate us. They didn’t even know about such a Turkish musical. These plays will continue because there are many young people working voluntarily."

Yazıcı said the rehearsals continued everyday for over three months under the leadership of director Hatıhan, adding: "This is the first Broadway performance of a Turkish musical. I hope we will make it permanent."

"The Joint Venture Company of Wonders," one of the most viewed musicals in Turkey, was first staged 29 years ago. The musical has been staged in many cities to more than 600 people.
Haberle ilgili daha fazlası: