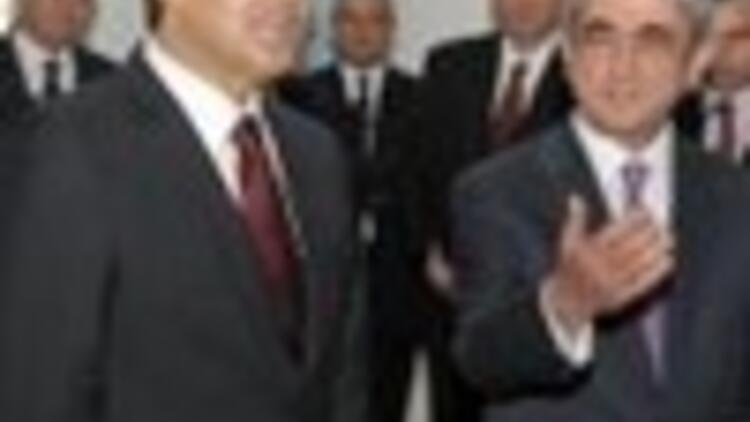 Turkey and Armenia decided to improve relations, including raising the level of regular consulting mechanism to foreign ministers, speeding up efforts to form a joint commission and opening the border for humanitarian aid. (UPDATED)

The visit was hailed as a step towards the normalization of relations between the two neighbors, who do not have any diplomatic relations because of 's invasion of .

The two leaders decided to improve diplomatic ties at the meetings held in , Hurriyet daily reported on Sunday.

The regular consulting mechanism between and will be improved and these negotiations will be raised to the foreign ministers level, the report said adding that presidents of both countries will meet again at United Nation's summit scheduled for the end of September.

The report also said the efforts to establish a joint commission for resolving the so-called genocide claims would be sped up and a separate commission would be formed to address the economic field.

In 2005, Turkish Prime Minister Tayyip Erdogan took a first step towards resolving the issue by proposing that a joint commission of historians launch an investigation and publish their conclusions, but the proposal was rejected by .

, with the backing of the diaspora, claims up to 1.5 million of their kin were slaughtered in orchestrated killings in 1915. rejects the claims, saying that 300,000 Armenians along with at least as many Turks died in civil strife that emerged when Armenians took up arms for independence in eastern .

HUMANITARIAN AID TO
The closed border between two countries could also be opened for humanitarian aid purpose depending on the gestures from Armenian side and the direction of the relations, Hurriyet said citing diplomatic sources.

The border has been closed since 1993, when protested 's occupation of the Nagorno-Karabakh region of , a close Turkish ally.

Turkish president also said the visit showed a will to set up an atmosphere to eliminate the problems between and adding that he hoped that his visit would be a start to solving the problems and raising the obstacles that exist between the two countries.

Gul added that he thanked Sargsyan for extending his support to 's Caucasus Stability and Cooperation Platform proposal.

The Armenian president also thanked Gul for accepting his invitation to and said that the Turkish president had invited him to watch the Turkey-Armenia match to be played in .

is among the first countries that recognized when it declared its independency in the early 1990s.

However there is no diplomatic relations between two countries, as presses the international community to admit the so-called "genocide" claims instead of accepting 's call to investigate the allegations, and its invasion of 20 percent of Azerbaijani territory despite U.N. Security Council resolutions on the issue.

"I believe that my visit was fruitful and that it promises hope for the future," Gul said after returning to , adding that he had a constructive and sincere" meeting with Sargsyan.

He said he had won 's support for a new regional grouping in the Caucasus following last month’s conflict between and .

"We were pleased with 's announcement that it supports 's proposal of a 'Caucasus Stability and Cooperation Platform'," Gul said adding that there was a ball in their court and this ball should not have remained in their court.

"The most important issue in the is the Karabagh issue. My visit to may contribute to the solution of this problem," Gul added.

But Gul said that neither the dispute nor the closed border between the two neighbors figured in his meeting with Armenian President Serzh Sargsyan.

"He did not mention, or even imply at, the so-called genocide claims," Gul was quoted as saying by the Anatolian Agency said.