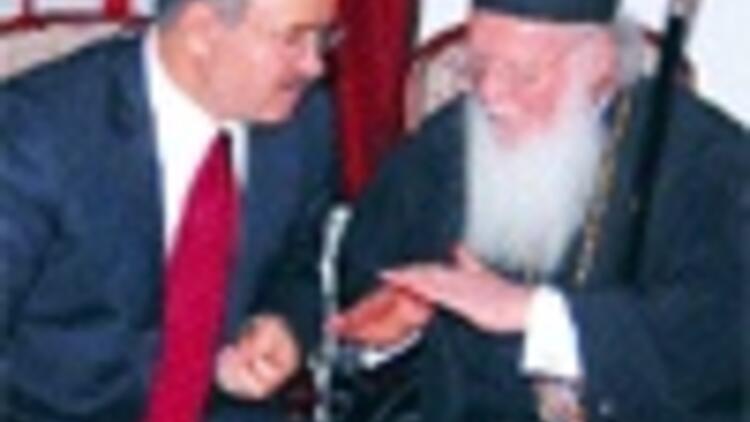 ISTANBUL - Since 1971 there have been attempts to reopen the Halki Theological Seminary on Istanbul’s Heybeliada and while the appeals have not fallen on deaf ears, various reasons have been put forward as to why it should not be reopened. Successive Turkish governments have argued that reopening Halki would lead the way to applications for Muslim universities, even though Muslim seminaries were never opened before. However, the current education minister has said he can see no reason why it cannot be reopened

Ever since 1971, the Halki Theological School that belonged to the Orthodox Church on Heybeli Island near Istanbul has been closed on the grounds that all private schools of higher education be shut down.

This occurred following a period of increasing period of internal strife and near chaos that led to an intervention but not an outright coup by the Turkish military establishment. The closure of the schools of higher education was an attempt to quell some of the chaos that in part was being perpetrated by university students. It was not directly aimed at the Halki Theological School; however, this closure was carried out by the National Education Directorate, not the ministry and not the military.

In 2004 on the occasion for year-long celebrations for the 550th anniversary of the Greek School in Fener, Turkey’s Education Minister Hüseyin Çelik attended ceremonies with the Greek Education Minister at the time Petros Efthimiou. Çelik pointed out that he didn’t see any reason why it couldn’t be opened, a claim that he repeated in a Sabah newspaper interview in August 2004. At that time he pointed out that if an Islamic religious faculty with a Turkish Muslim in charge of it could be built in the center of Rotterdam in the Netherlands, why couldn’t the school be reopened. In 2005, the new Greek Minister of Education Marietta Yannakou came and Çelik was present at this occasion as well.

Since 1971 there have been attempts to reopen the Halki School and while the appeals have not fallen on deaf ears, various reasons have been put forward as to why it should not be reopened. These have mainly been put forward by groups that could be considered ultra-nationalists who believe their concerns are valid. They see the very existence of the Orthodox Patriarchate in Istanbul as a nest of spies working to undermine the Turkish Republic and they don’t hesitate to express their antipathy by staging protest meetings at the gates of the Patriarchate in Fener. Along with this they believe that the opening of the school would lead to the education of additional Turkish enemies who would act as agents for the Greek government as if Greece were the same country that it was many decades ago. In the meantime all this was played out against a backdrop of Turkish and Greek Cypriot troubles with each side seemingly each other’s bargain chips to gain the upper hand or at least that held each other’s populations "hostage."

Arguments for opening
The rationale for re-opening the school has been openly expressed by the Patriarch and other members of the Fener Patriarchate Ğ the need to educate men in Turkey who will go on to be among the upper hierarchy of the church. The school is actually protected by the Lausanne Treaty of 1923. As an institution created under the Ottomans it is protected as part of the minority rights granted under the treaty and therefore should not be closed. However, when the Turkish Education Ministry wanted to attach it to Istanbul University, the Patriarchate objected and so it has remained closed. This is quite to the contrary for the Patriarchate’s administration building in Fener that burned down in 1941. Thanks to the reporting in the Daily News, the building was finally repaired between 1989 and 1991. The Fener Patriarchate has reason to be concerned because under Turkish law the patriarch has to be a Turkish citizen and that narrows the possible candidates to a handful of possibilities. If the theological seminary were open, this would increase the number of candidates. Also many of the graduates would most likely have to seek posts in the Orthodox Church outside of Turkey and this should help with Turkey’s image.

The issue has surfaced from time to time but was most recently thanks to a speech by U.S. President Barack Obama to the Turkish Parliament this month. In it he said:

"In the last several years, you've abolished state security courts, you've expanded the right to counsel. You've reformed the penal code and strengthened laws that govern the freedom of the press and assembly. You've lifted bans on teaching and broadcasting Kurdish, and the world noted with respect the important signal sent through a new state Kurdish television station.

"These achievements have created new laws that must be implemented, and a momentum that should be sustained. For democracies cannot be static - they must move forward. Freedom of religion and expression lead to a strong and vibrant civil society that only strengthens the state, which is why steps like reopening Halki Seminary will send such an important signal inside Turkey and beyond."

At first the issue of opening the Halki Seminary as Obama addressed it didn’t penetrate Turkish consciousness. It took a couple of days for this to sink in and finally it did after Obama met with Greek Orthodox Ecumenical Patriarch Bartholomew. The latter expressed his pleasure for Obama’s support for the opening of the theological seminary.

One of the latest proposals is for the seminary to become a private university under the auspices of a foundation such as the way Koç University was established under the auspices of the Vehbi Koç Foundation. The Heybeliada University would be set up under the Ayatriada Foundation with the Patriarch chairing the latter and people with Turkish citizenship making up the rest of the board. To set up a university that institution has to have two faculties and Aktar has proposed a faculty of religious studies and a faculty of arts and sciences. The idea is worth considering at the very least although it seems that the patriarch has rejected this idea because it won’t meet the needs of the patriarchate and wouldn’t train students to become priests. On the other hand Turkish governments have argued that reopening Halki would lead the way to applications for Muslim universities, even though Muslim seminaries were never opened before.

Yet another theory is that Turkish governments have been holding out for a quid-pro-quo arrangement Ğ the Halki Seminary could open if the Greeks would open a mosque in Athens, the only capital in the European Union without a mosque for its Muslim citizens. Similar protests arose when a plan was to be put into action that would result in a mosque and cemetery being built near the international airport in time for the 2004 Olympics. The second proposal on land owned by the Greek navy also has been delayed indefinitely. The only mosque structure in Athens dates from the 15th century and the conquest of Sultan Fatih Mehmed. It is currently being used as a ceramics museum. Protests have come from people living in each area and the Greek Orthodox Church.

But going back to Turkey, it is interesting that when you speak with businessmen and intellectuals, they say they can’t understand why Turkey’s decision-makers delay reopening the theological seminary. Even the people on Heybeli Island are in favor of it. Plus it would be such a good public relations effort for the country and would help in the effort to become a full member of the European Union.

History of Halki Theological Seminary
The Halki Seminary was an educational organization that opened its doors in 1844 as the monastery of the Holy Trinity and theological school. One might have thought this should have been disapproved of given that Greece had fought and won its freedom from the Ottoman Empire just a couple of decades earlier and the Greeks were considered enemies. And if you look at the history of this school, it was only in 1971 that it was closed, lasting from the end of the Ottoman Empire and through the early Turkish Republic including the presidency of Mustafa Kemal Ataturk.

An earthquake in June 1894 destroyed all the buildings of the monastery and theological school with the exception of the chapel. This stopped the operation of the school. The present day facilities were financed by Pavlos Skilitsis Stefanovick and built by architect Periklis Fotiadis. Operations were re-inaugurated in October 1896. Major renovations took place in the 1950s, including the monastery church.

This arrangement continued until 1971 when the school was closed after passage of a law that prohibited operation of privately owned schools of higher education in Turkey. It has remained closed but in immaculate condition so that it could immediately enroll students again.