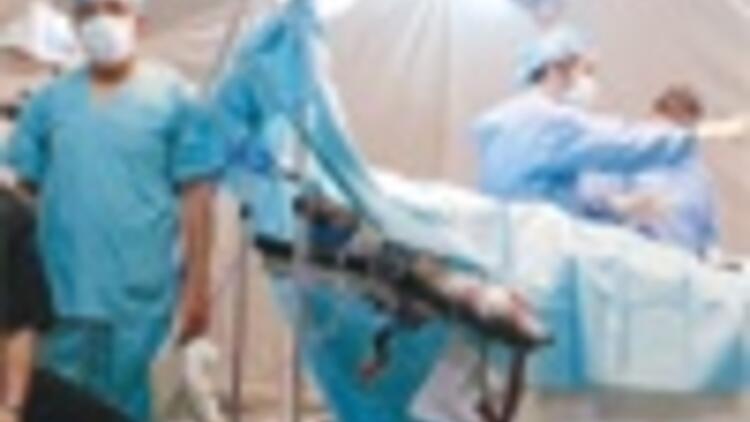 ISTANBUL - Anesthesiologist Ercan Türeci from Cerrahpaşa Medical School, the only active Turkish member of Doctors Without Borders, recently returned from a mission to the Gaza Strip. He says it is not hard for any doctor working in urban hospitals to work in conflict areas.

Sujut, 2, was crying hard in her mother’s arms because of the burning wounds on her face and body, suffered during a bomb attack a couple of weeks ago. She needed anesthesia for surgery, but was not allowing doctors at the Gaza Strip clinic to give her an injection. After a doctor turned a surgical glove into a balloon and sang a Turkish folk song from the Black Sea city of Çarşamba, the little girl calmed down and let Dr. Ercan Türeci give her the injection and put her to sleep.

Türeci, an anesthesiologist from Cerrahpaşa Medical School, is the only active Turkish member of Doctors Without Borders, or MSF. He returned from his fifth mission, this one to the Gaza Strip, last Sunday.

"It was not hard for me," said Türeci, who has experienced conflicts and disasters that would freeze most people’s blood, and that most witness only on TV or in the movies. However, he was insistent that the conditions were not that extraordinary. "The conditions there are not that different from the conditions in which we were raised," he said.

Born in 1958, Türeci was a young man in the period prior to the Sept. 12, 1980, military coup and was politically active in one of the leftist youth groups at that time.

"Security of life is always a problem [in MSF missions]," he said, adding that in the middle of a conflict, there is the risk of being abducted, as two MSF staff members were in April in Somalia. "However, you do not care about security when you are from Turkey’s 1978 generation."

Despite his seeming cold-bloodedness, Türeci acknowledged that his work is not something everyone can do. "You do not save the whole world when you do this job, but it is also not something that everyone can do," he said. That is why he refuses to advise his students to pursue the same experience. "Everyone finds his own way. If someone has worries about life, he will go."

What made Türeci go thousands of kilometers away, sometimes even using his own days off from university, was his "na?ve idealism," the same thing that made him pursue medicine in the first place. Born in Çarşamba, in the Black Sea province of Rize, Türeci wanted to choose a profession in which he would be able to help people and so became a doctor.

Though he initially wanted to work in public health, he said he realized it is impossible to do well in Turkey after he was exiled from office five times in two years while working in a village clinic early in his career. That is when he became an anesthesiologist.

"I was dreaming of returning to Çarşamba and working in a state hospital, doing one or no surgeries each day, reading books and be with nature," he said. Instead, he is getting ready for his sixth mission since he joined MSF in 2005.

"What makes me crazy is the feeling of despair," he said, remembering a 21-year-old Nigerian boy who died because there was no chest surgeon available to remove the bullets from his lungs. "I have been a doctor for 13 years, but I still have a place inside me that has not become callous."
Haberle ilgili daha fazlası: