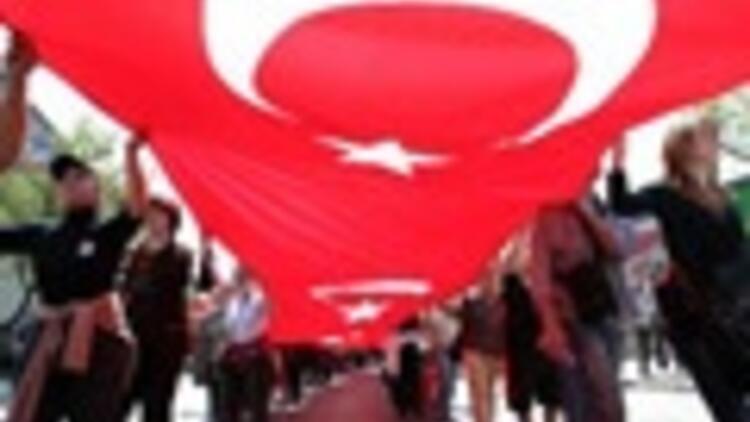 An estimated million or so people flowed yesterday in the central Istanbul Cagalayan intersection to wave flags and shout support for secularity and protest against AKP presidential candidate Abdullah Gul.

IN PICTURES: SEAF OF RED AND WHITE FILLS ISTANBUL

The crowds started heading for Caglayan early Sunday morning, and by mid afternoon, they had reached capacity level, with what some characterized as a "sea of red and white," as the red and white Turkish flag of star and crescent could been seen everywhere, on flags, tee-shirts, posters, balloons. The protest rally, which appeared to far outrank the April 14 Ankara Tandogan meeting in terms of sheer size, was led by and participated in by regular citizens, as well as members of civil society organizations from all over Turkey. Notably, members of the Ataturk Thought Foundation (ADD), the Turkish Modern Life Support Foundation, and many academicians were present and took on speaking roles at the demonstration.

The April 28 demonstration in Caglayan was preceded by a Friday afternoon vote in Turkish Parliament in which presidential candidate Abdullah Gul did not receive the requisite number of votes to make him president, though a second round of voting is scheduled for Wednesday. Whether or not the second round will actually take place, or whether the ruling AKP will declare early general elections, is still in question, as the main opposition CHP has taken their case claiming insufficient quorum for voting in Parliament to the Turkish Constitutional Court. The Constitutional Court will issue its ruling sometime later this week, although on which day it is not yet clear. The main opposition CHP has staked its opposition to the AKP's choice of president based on the fact that the office of presidency in Turkey has traditionally been one associated with Ataturk and Ataturkian principles, as Ataturk himself occupied Cankaya Presidential Palace in Ankara for many years. While Gul publicly supports Ataturk and his principles, his wife Hayrunisa Gul wears a headscarf, which is a symbol of much controversy in Turkey, and his political roots include ties to parties which have been preceived (whether rightly or wrongly) as anti-secular through the years.

Meanwhile, the Turkish Armed Forces issued a written statement on April 27 at midnight stating their concerns and worries about the secular status of the nation. What affect this will have on the outcome from the Constitutional Court is not yet clear.