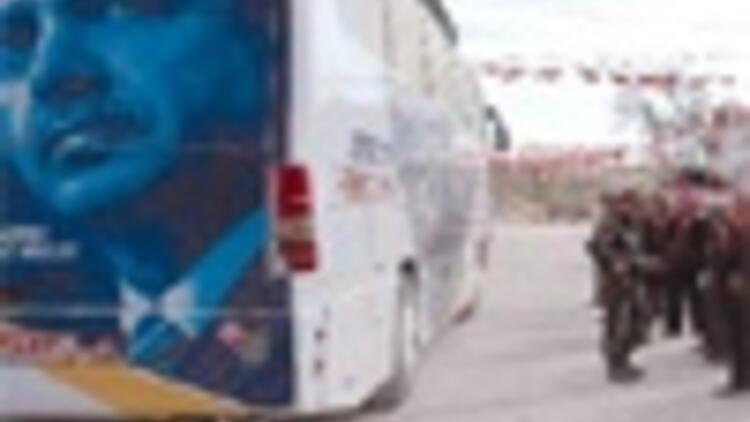 KONYA - A few women in black chadors walk rapidly behind a long-bearded old man at the entrance of Konya, the largest province by area in Turkey. A sign at the entrance captures the attention of passersby, citing the words of Sufism’s important figure, Rumi.

"Come, come whatever you are / whether you are an infidel, an idolater or a fire-worshipper / whether you break your vow a thousand times, come!" the sign reads, marking the city’s importance in the world of Sufism. Konya, which hosts Rumi’s tomb, is known as the city of sheiks and dervishes.

The city seems modern in terms of its architecture but the majority of its people lead a conservative lifestyle, molded by religious values. Like Turkey’s other cities, Konya is also readying for the March 29 local elections. But it has no sign of upcoming elections, except a few squares that are decorated with flags of political parties. Speaking to Hürriyet Daily News & Economic Review, Konya Governor Osman Aydın said preparations for local elections continued in peace in the city.

"Here is Konya. Here is the Justice and Development Party’s (or AKP) fortress. (Prime Minister) Recep Tayyip Erdoğan has entrusted Tahir Akyürek to us," Arif Erdemli, the owner of a candy shop, said. Indeed whoever we met, we heard that AKP’s mayoral candidate for Konya, Akyürek, is unrivaled in the city.

President of the Konya Association of Journalists, Sefa Özdemir, is one of the figures who closely follow the view of residents ahead of elections. "Konya residents love Prime Minister Erdoğan so much. They do not want to separate the local administration from the government," he said.
In relation to the adverse effects of the financial crisis, which will allegedly decrease AKP votes, Özdemir said Akyürek would still keep his vote rate at around 65 percent. "If there had not been any financial crisis, he would get more than 75 percent of votes," he said.

Pointing to the city’s conservative roots, editor of the daily Konya Postası Ömer Kara also underlined AKP’s sovereignty in Konya. But he also drew attention to some districts of the city where the Nationalist Movement Party, or MHP, has engaged in a fierce battle against the ruling party. "MHP may become the winner in Ereğli, Cihanbeyli and Akşehir districts," Kara said.

According to MHP’s mayoral candidate for Konya Metropolitan Municipality Hikmet Çay, his party will win the elections in the districts. Çay believed he would be elected as well. However, the general atmosphere of the city proves the opposite.

The Republican People’s Party, or CHP’s, mayoral candidate, Hasan Sarımehmetoğlu, is also assertive in the election race. "The results may be surprising," he said, pointing out the financial crisis and increasing unemployment rates.

Sarımehmetoğlu also said that "religious orders" played a determining role in Konya in terms of election results. Konya has six or seven active religious orders including the Hakyolcular (Esat Coşan Community) and Gülen Community. It seems that religious orders will support the AKP in the upcoming local elections as they did in 2004 elections.

"Religious orders are dominant here. They set the rules," a student and CHP supporter said, speaking on the condition of anonymity.

Konya was former Prime Minister Necmettin Erbakan’s stronghold from the 1970s until 2000. Now, it is the stronghold of Erdoğan, who was Erbakan’s student. In the 2004 elections, the AKP’s Akyürek was elected as mayor with 63 percent of the vote. His rival was the Saadet (Felicity) Party's candidate, Mustafa Özkafa, whose votes remained at 26 percent. Özkafa is once again the Saardet Party’s mayoral candidate, but journalist Kara said Özkafa could barely hope for 10 percent of the votes in the March elections.

Akyürek seems confident about his victory in the elections. "I was elected, getting 63 percent of vote. We will increase the rate," he said.

Stating that they had supplied many services to Konya residents for the last five years, Akyürek said they would complete 15 projects in the new term. "An organized agricultural zone and the Rumi Culture Valley are two leading projects," he said.

Akyürek also marked the "Turkey’s Science Center" project as one of their most important projects. "The science center, which we will establish on an area of 16,000 square meters, will theoretically and experimentally present many subjects including space science and creation," he said. The project is also supported by the Scientific and Technological Research Council of Turkey, or TÜBİTAK. President of Konya Trade Chamber Hüseyin Üzülmez pointed out Erdoğan’s challenge in Davos summit as a factor that increased the AKP’s points among city residents. In relation to the claims that the financial crisis will pull down the AKP’s votes, Üzülmez said the effects of the crisis have not been completely experienced in Konya yet.

"Here, there are small- and medium-sized enterprises that have lately started to experience the adverse effects. Even if these effects aggravate until the elections, Akyürek will still preserve his support of 65 percent," Üzülmez said.