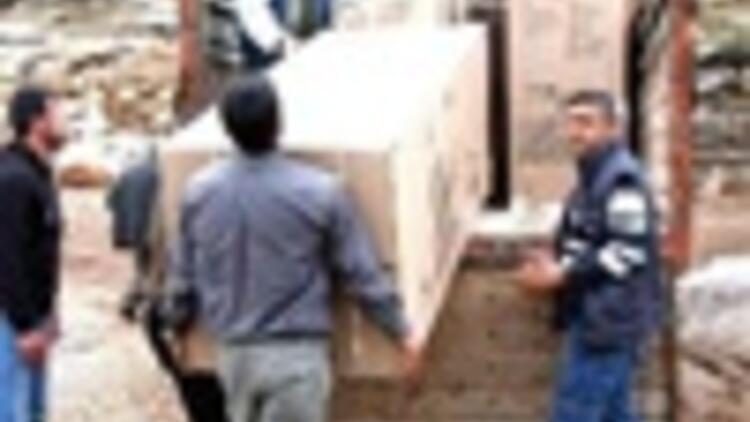 ANKARA - Distribution of white goods and other aid to the poor has nothing to do with looming local elections but is only part of a long-term policy to help the needy, the government’s No. 2 leader claimed in an interview.

Rather, said Hayati Yazıcı, the deputy prime minister, the recent distribution of aid was based on an objective assessment of need and the timing has nothing to do with politics.

"The cities where we distributed the aid were chosen according to their rank in the development index. That is why we focused on eastern and southeastern Anatolian towns," Yazıcı said.

Speculation has been rife in recent weeks that the ruling party's distribution of goods before an election is an attempt to win over voters. At one point, the electoral watchdog made political history, officially warning the government to halt distribution of aid to the poor.

The suspension lasted less than 24 hours. The Hürriyet Daily News & Economic Review interviewed Yazıcı, who is responsible for the state aid, to get some clarity on the issue. Yazıcı has long been among Prime Minister Recep Tayyip Erdoğan closest aides in the Justice and Development Party, or AKP.

In many cities, especially in eastern and southeastern Anatolia where the ruling party is not very strong, goods have recently been distributed to the needy, not long before the March 29 elections. In Tunceli, refrigerators, washing machines and dishwashers were distributed to the poor, some of whom do not even have electricity or running water.

According to Yazıcı, the decision to distribute the white goods was based on the results of a questionnaire revealing the imminent needs of the poor, he said.

Regarding the Supreme Election Board, or YSK’s, stern warning to the government and officials, Yazıcı said he was not in a place to criticize the country’s electoral watchdog. "It’s not correct for the YSK to make a statement on the distribution of these goods in a little residential village of Nazimiye, in Tunceli. If there’s a violation of the electoral laws, then criminal complaints can be filed to the board’s local offices. There was no such complaint. What the YSK did was just draw attention to the situation," he said.

Turkey’s eastern and southeastern areas are the poorest and least developed regions in the country. Current and previous governments have been criticized for not being able to attract investment in those regions to improve socioeconomic levels, which is also seen as a remedy to the prevalence of terrorism there. "This project will continue in some other cities after the elections," he said. "The people’s main agenda is not the local elections but how to improve their living," Yazıcı said. "It’s not correct to think that people will change which party they vote for after receiving the aid," he said. "It’s a state act. It is only a coincidence that it occurred before the elections. The elections were not our purpose."

Previously responsible for the party’s organization, Yazıcı is one of the most informed on how local elections play out in provincial areas.

"I will not give you a percentage. But I will say our political rivals will not be able to say, ’The AKP has been defeated or unsuccessful,’" he said. But Yazıcı was firm that they would not lose the Istanbul and Ankara municipalities. "Does Kemal Kılıçdaroğlu (Republican People’s Party, or CHP’s, Istanbul candidate) have a project for Istanbul? He is just a like an inspector, inspecting Istanbul. He is willing to rule Istanbul but he has not offered concrete projects," he said. Yazıcı preferred not to defend his fellow Cabinet member, Justice Minister Mehmet Ali Şahin’s, controversial threatening remarks to citizens to cast their votes for the ruling party if they wanted good service from the elected mayor. "I think he crossed the line if he really did say those words. And he did the right thing by correcting his words. We are responsible for the people. We are sending funds to municipalities to serve our citizens. There can be no discrimination among the municipalities," he said.

Yazıcı also commented on the leader of the pro-Kurdish Democratic Society Party, or DTP, Ahmet Türk’s Kurdish speech in his party’s meeting in Parliament on Tuesday. For Yazıcı, the DTP Ğ competing with the AKP for municipal elections in southeastern Anatolia Ğ is trying to sabotage the government’s progress in the region and attraction for Turkish Kurds.

"It seems they are planning to sabotage our government’s initiative of launching TRT 6, which in fact helped ease our citizens in this region. The rating of the other Kurdish television channel, Roj TV, has been decreasing since TRT 6 began broadcasting," he said. Criticizing Ahmet Türk for speaking Kurdish in Parliament, he said: "In some constituencies where the electorate does not speak Turkish, local politicians can use Kurdish. But Parliament is not a suitable place for it."