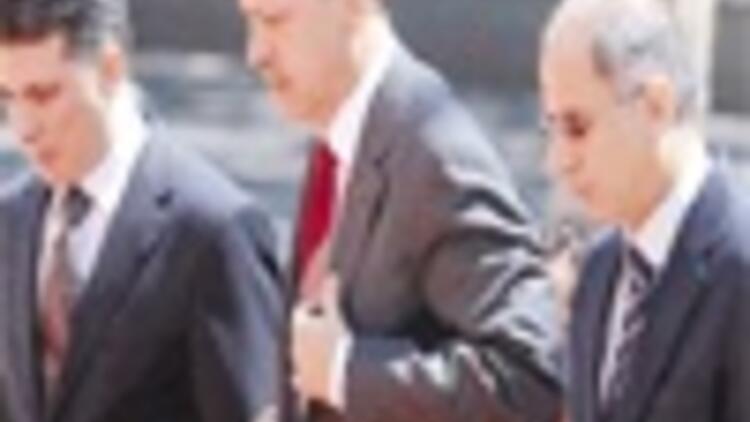 ANKARA - No official statement is made after a meeting between the prime minister and the top general, but the justice minister's presence has led to speculation that legislation restricting the powers of military courts was also discussed.

Prime Minister Recep Tayyip Erdoğan and Chief of Staff Gen. İlker Başbuğ came together in a surprise meeting Monday as tension in the country escalated over the military’s alleged anti-government plan published recently in a national daily.

The meeting, which regularly takes place every Thursday, came a day before a bimonthly meeting of the state’s top security board, the National Security Council, or MGK. Başbuğ said in a press conference Friday that he would bring the document in question onto the MGK’s agenda. The Monday summit at the Prime Ministry lasted more than 90 minutes and was also attended by Justice Minister Sadullah Ergin. No official statement was made after the meeting, but Ergin’s presence led to speculation that recently adopted legislation restricting the powers of military courts was also discussed.

The recent controversial legislation Ğ which would amend the Code of Criminal Procedures, or CMUK, if signed by the president and pave the way for civilian courts to try members of the military who are accused of crimes including threats to national security and constitutional violations, such as coup attempts in peace time Ğ sparked tension among the ruling Justice and Development Party, or AKP, and opposition parties.

Erdoğan defended the legislation, saying the move targeted "coups and coup plotters" while main opposition Republican People’s Party, or CHP, leader Deniz Baykal accused the AKP of passing the law hastily in a "midnight coup," and not informing them of the move in advance. The legislation was voted on before dawn Friday after a last-minute proposal by the AKP with the participation of a small number of opposition deputies.

The timing of the last-minute amendment, which came one day before Chief of General Staff Gen. İlker Başbuğ held a press conference, also drew criticism. The amendment was associated with Başbuğ’s press conference, in which he said it was the duty of the military judiciary to conduct the probe regarding military personnel, including Navy Col. Dursun Çiçek, who is reported to have prepared the alleged military plan to dismantle the ruling AKP. Speaking to daily Milliyet on Monday, the justice minister said it was just a coincidence that the legislation passed only hours before Başbuğ held a press conference. He criticized that the legislation was associated with Başbuğ’s press meeting, saying the legislation did not target Başbuğ and Çiçek.

"How could we know what our chief of General Staff would say in that press conference in advance? He held a press conference one day after the amendment. We can have no bad intentions about the commander," Ergin said. "The laws aren’t made for one or some people, and the amendment targets nobody." Ergin also denied allegations raised by the CHP that the AKP passed the amendment in a secret way.

"We didn’t cheat anybody. I visited the CHP headquarters in the morning and briefed party members on the amendment. The amendment was not a secret," he said. "We earlier agreed with the opposition parties to pass these legislations before Parliament went into summer recess. So we had to pass these amendments."

The military courts’ jurisdiction over civilians remains a problematic issue. It has been heard by the European Court of Human Rights and criticized in EU progress reports, according to Ergin. The amendments were made in line with the European Union harmonization process and in cooperation with the opposition parties, he said. Ergin also said the amendment was not against the Constitution as the CHP claimed.

If President Abdullah Gül signs the legislation, the civilian judiciary will be granted the right to judge military personnel even if the crime was committed entirely within the military by military personnel. The military judiciary, meanwhile, would handle crimes committed during wartime or under martial law. Meanwhile, it has been revealed that the reasons for the amendment were defined in detail in the AKP’s proposal but that the amendment went unnoticed by opposition parties, which did not oppose the move during the parliamentary session.

But the CHP announced Monday that it would apply to the Constitutional Court to annul the legislation if Gül approves the amendment, saying that the justice minister did not fully explain the issue and that the move was against Article 145 of the Constitution, which declares that the military judiciary is responsible for cases within the military. The opposition Nationalist Movement Party, or MHP, said it would back the CHP on the issue.