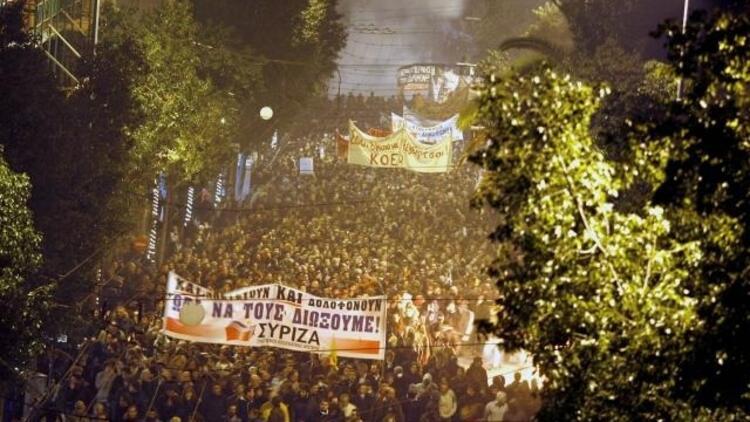 Greek authorities braced for the more violence Tuesday with the funeral planned for a teenager whose shooting by police led to the worst rioting the country has seen in decades. (UPDATED) 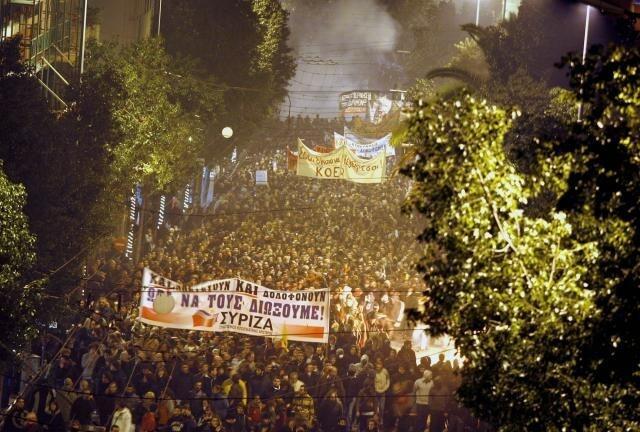 Left-wing youth demonstrate in the center of Athens. The banner in front reads "Time to Through Them Out!", Monday, Dec. 8, 2008. Rioters smashed, burned and looted buildings in several Greek cities on Monday protesting against the fatal police shooting of a teenager in Athens Saturday night. The circumstances surrounding the shooting of a 15-year-old boy by a police special guard in the downtown Athens district of Exarchia are still unclear. But the death triggered extensive riots in cities around the country overnight, with youths burning shops, setting up flaming barricades across streets and torching cars. (AP Photo/Dimitri Messinis)
Haberin Devamı 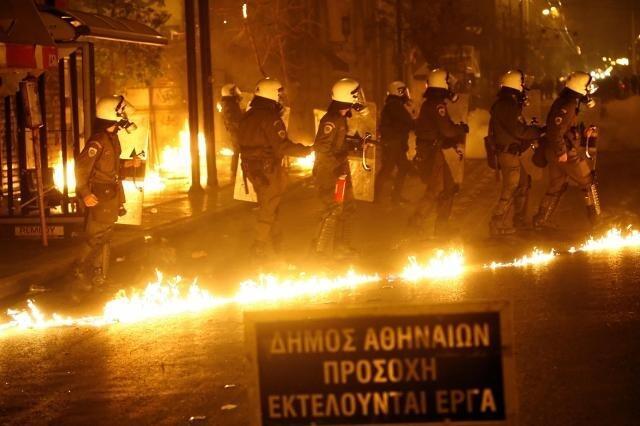 Riot police are attacked with petrol bombs outside Athens' Polytechnic during a night of riots on December 08, 2008. The riots erupted as thousands demonstrated in Athens and Salonika to protest the death of a 15-year-old pupil at the hands of Greek police on Saturday. AFP PHOTO / Aris Messinis 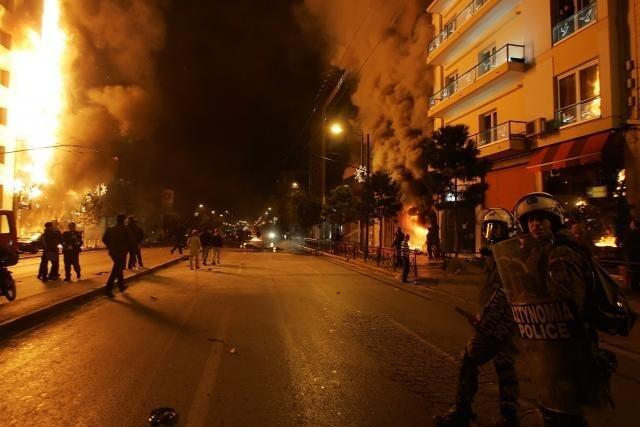 riot police look at fires at banks, shops, house at Athens main Syngrou avenue during riots and chaos in Athens on December 8, 2008. Fury at the fatal police shooting of a schoolboy, 15-year-old Alexandros Grigoropoulos, erupted in a third day of rioting across Greece on Monday, with youths burning banks and shops, attacking hotels and clashing with the security forces. AFP PHOTO / LOUISA GOULIAMAKI 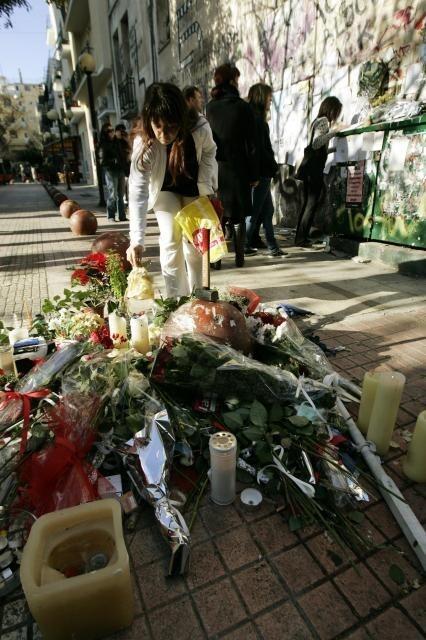 A youth places flowers at an impromptu shrine with flowers and candles in memory of teenager Alexandros Grigoropoulos, who was killed in a police shooting Saturday, in central Athens, Tuesday Dec. 9, 2008.  The shooting sparked riots in Athens and other Greek cities for  three successive nights . (AP Photo/Lefteris Pitarakis) 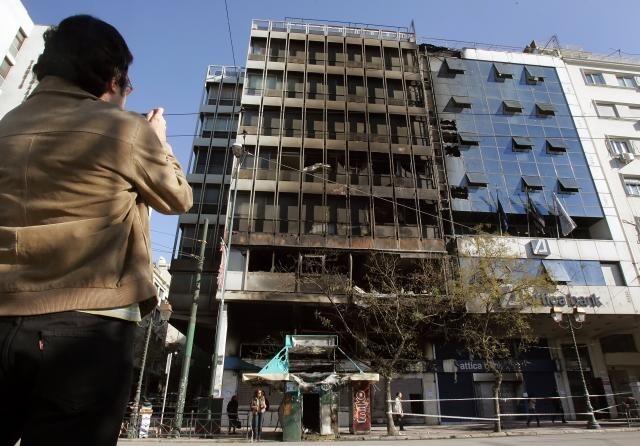 A man takes pictures of the burned Emboriki and Attica banks in central Athens on December 9, 2008. Authorities closed off many Athens streets today after a third night of rampaging violence by groups of youths sparked by the fatal police shooting of a 15-year-old boy.With more protests expected on the day of the funeral of Alexis Grigoropoulos, Prime Minister Costas Karamanlis made a solemn appeal for national unity to counter the worst unrest the country has seen in decades.AFP PHOTO / Louisa Gouliamaki 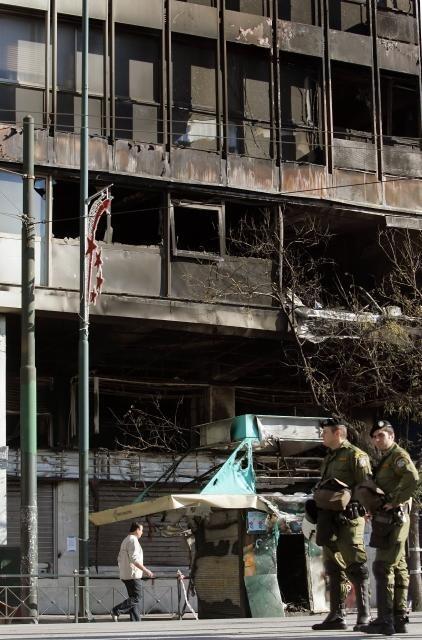 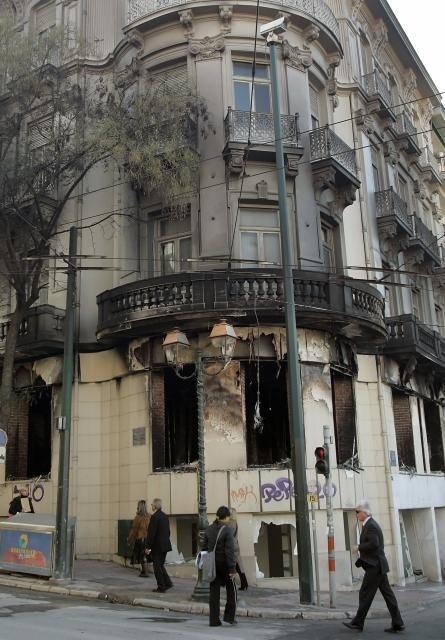 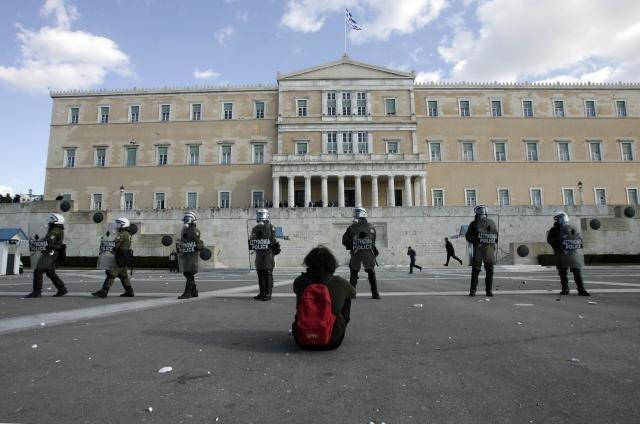 A student demonstrates in front of riot policemen in Athens December 9, 2008. Hundreds of protesters threw stones and bottles at lines of riot police outside the Greek parliament on Tuesday, in a fourth day of anti-government clashes triggered by police killing a teenager. REUTERS/John Kolesidis 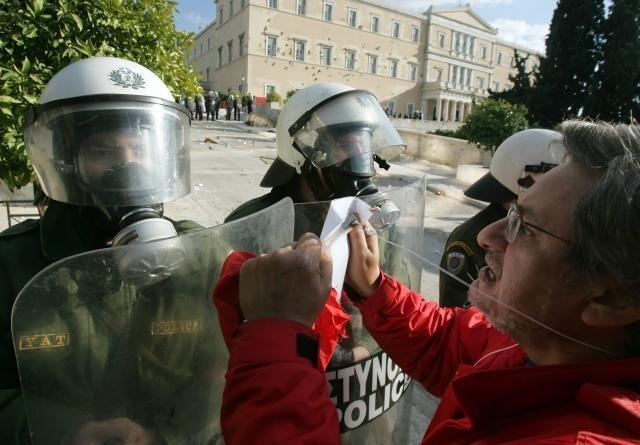 An angry man shows a picture of the dead schoolboy Alexis Grigoropoulos to riot police protecting the Greek parliament during a demonstration on December 9, 2008. Police and protesters clashed for the fourth day in Athens on Tuesday as the Greek opposition called on the government to resign over nationwide riots sparked by the police killing of a 15-year-old boy. AFP PHOTO / Louisa Gouliamaki 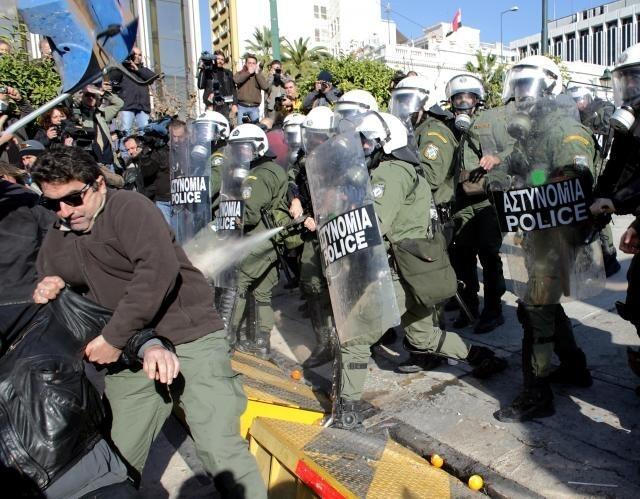 Demonstrators throw projectiles at police during riot in Athens on December 9, 2008. Police and protesters clashed for the fourth day in Athens today as the Greek opposition called on the government to resign over nationwide riots sparked by the police killing of a 15-year-old boy. AFP PHOTO /Stringer 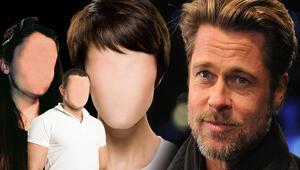 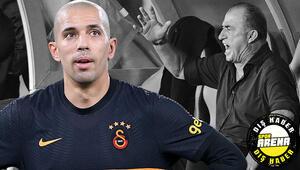 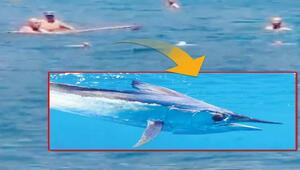