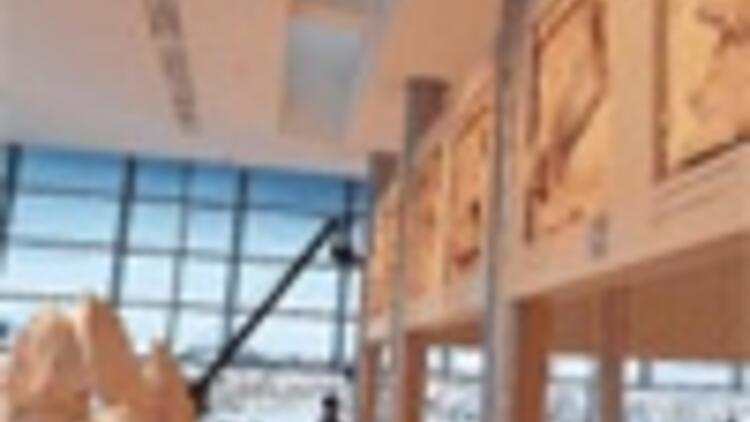 KATHIMERINI - The New Acropolis Museum opened in Athens on Sunday to visitors eager to explore its vast collection of sculptures and museum holds more than 4,000 ancient works, including the best surviving classical sculptures that once adorned the Acropolis.

The New Acropolis Museum is like a meteorite falling into Greece’s swamp, with the past, present and future becoming one at the moment of impact. The waves churn up our daily routine, mix the waters, highlight forgotten images and eras, and create new currents and hopes.Finally, the new museum is here. It will stay and it will determine, for a long time, the relationship between the Athenians (and visitors) and the Acropolis, as well as the city itself.

A museum on its own cannot change a city, but the fact that an important new monument has been added to the city - a monument that honors and displays the past in a dynamic way - re-evaluates the relationship between the Greeks and their heritage. The year 2009 can now be added to the long chronology of creation and destruction that has marked the Acropolis from the prehistoric era (when the first residents of the fertile coastal plain found refuge behind the rocky hill’s natural fortifications), to the careful restoration of the monuments that is still being carried out today. Our duty is not to build new temples nor to destroy them, but to guard them and display them to the rest of the world in the best possible way. This is what the new museum declares.

The museum’s opening has given new impetus to the demand for the return of the sculptures that are in the British Museum. The new museum highlights their absence from the whole and this is already the strongest argument in favor of their return. And the museum achieves something else - it presents and showcases the many other treasures that are now coming out of storerooms and the cramped old museum up on the Acropolis. Now we can see that the Parthenon’s sculptures are not only those that are in London, and that the Acropolis is not only the Parthenon (but also the Temple of Athena Nike, the Erechtheum, the Propylaea, the walls, and so on).

So many up to the present

And antiquity was not only the Classical Age, but also the Mycenaean era, the Archaic age and so many up to the present. Every era has something to show other than the periods of construction - even if this is the destruction of the old temples by Persian invaders, or the damage done when Venetian besiegers hit a Turkish arsenal inside the Parthenon, or Elgin’s theft, or today’s acid rain and conservation efforts. By displaying history as well as the Acropolis sculptures, the new museum raises high the bar for Greeks’ relationship with their heritage. If we really take our culture seriously, we must show this all over the country and in every way (not least the collection of litter). Because what we have built is not a pretty, regional museum. To succeed, the New Acropolis Museum must be an international center of study and debate. The great challenge is for it to provoke new interest and new currents in the study of ancient Greece. With its presence alone, the museum demands a more active involvement with the antiquities from anyone in the world interested in Greece.

The New Acropolis Museum already sits in the heart of the city and places new demands on us. And for a long time it will tell the story of the age in which it was built. To speak for us, it must fill with people - people with ideas, who are not afraid of hard work, who honor the past and build for the future. Like the time when Pericles, Pheidias and their friends decided to push aside the ruins left by the Persians and build in honor of their free city.

Today we do not build Parthenons - we already have perfection in our midst - but at last we have a great new public building that shows we can see the Acropolis in all its glory, and that we, too, are capable of building for the future.

Kathimerini is a Greek publication that publishes in Greek and English, and has strategic ties with the Hürriyet Daily News & Economic Review. Nikos Konstandaras is editor-in-chief of the paper's English publication.
False