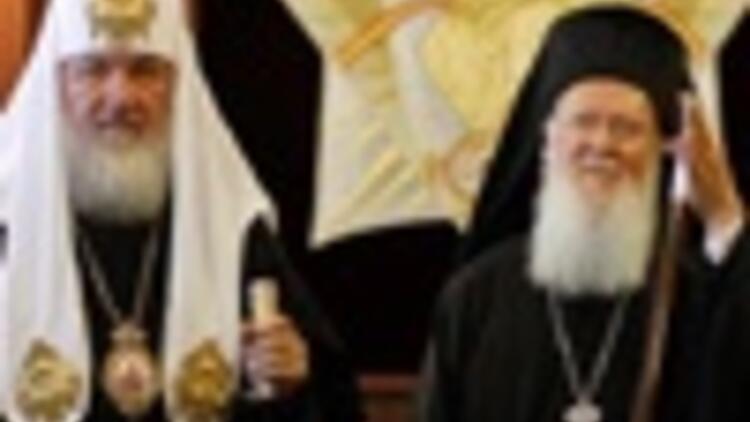 ISTANBUL - Fener Greek Orthodox Patriarch Bartholomew and the head of the Russian Orthodox Church Patriarch Kirill gave the message of solidarity and unity in their meeting in Istanbul on Saturday.

Patriarch Kirill arrived in on Saturday for a three-day visit and met with Barholomew. Kirill also attended a religious service before the meeting, the state-run Anatolian Agency reported.

They were expected to discuss the sensitive issue of the churches in and during the visit of Krill who enthroned in February to lead the Russian Orthodox Church.

Priests kissed Kirill's hands and children gave him flowers when he arrived to the sound of bells ringing at the Patriarchal Church of Saint George, where he blessed parishioners and prayed at icons, Reuters reported.

"I hope my visit will be the start of a renewal in our relationship," Kirill told reporters before his talks with Patriarch Bartholomew.

He said he agrees with the message of Bartholomew that the two institutions find themselves as members of a joint church.

Bartholomew, an ethnic Greek but a Turkish citizen, said Kirill's presence in is a message of unity. "Your visit to the patriarchate and the mother church is a source of great joy and deep emotion. Your presence here carries the message of unity, togetherness and fraternity with the ," Bartholomew was quoted as saying by the news agencies.

Relations between the Churches have been strained in the past because Churches in some former Soviet states, such as , have broken away from the Russian Orthodox Church and tried to pledge allegiance to Bartholomew instead.

A spokesman for Bartholomew said the Churches of Estonia and were expected to be on the agenda during the talks, Reuters also reported.

and have long been in dispute over the ex-Soviet state's right to its own independent church. The global Orthodox Church does not recognize the .

Kirill will attend a joint mass with Bartholomew on Sunday and is expected to hold talks with Prime Minister Tayyip Erdogan and President Abdullah Gul when he then visits .

Kirill, leader of 160 million Russian Orthodox believers, is seen as an outspoken modernizer who may thaw ties with the Catholic Church. He was de facto "foreign minister" of the patriarchate for two decades before succeeding Alexiy II.