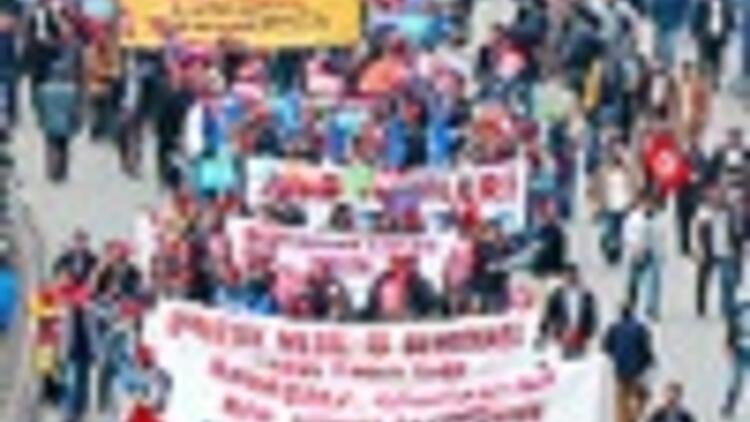 ANKARA - The Turkish government is readying to declare May 1, or May Day, a public holiday, meeting decades-old expectations of workers and labor unions.

"We have started the legal proceduret," Labor Minister Faruk Çelik told reporters yesterday before meeting with union representatives. Unions welcomed the government's attempt even as they aired their requests for more rights and freedoms after the meeting.

Opposition Republican People’s Party, or CHP, leader Deniz Baykal supported the attempt in a written statement.
In the statement he encouraged the government to declare not only May 1 but also Nevruz a public holiday and to open Istanbul's Taksim Square for the celebrations. Baykal also claimed that the decrease in the ruling Justice and Development Party, AKP's, votes in the March 29 local elections urged the government to take such a step.

The AKP government last year decided to celebrate May 1 as the Labor and Solidarity Day, but disregarded requests to declare the day a national public holiday. Erdoğan’s instructions came on the same day as Türk-İş’s request to celebrate May Day at Istanbul’s Taksim Square, which has a symbolic importance for Turkish workers. The request was rejected last year, leading to clashes between the police and the members of the labor unions, who started to march toward Taksim Square during the celebrations. Labor unions have still maintained their firm stance on the issue. "The government’s attempt to declare May 1 a public holiday is certainly an important development, but it is not enough," DİSK President Süleyman Çelebi said yesterday, adding that Taksim Square should be opened for celebrations.

Çelebi also pointed to the EU report on Turkey, which called on the government to hold talks with the unions for peaceful May Day celebrations. He stated that many unionists from Europe and deputies from the European Parliament will attend celebrations in Turkey. Hak-İş President Salim Uslu also wanted authorities to remove restrictions for May Day celebrations at Taksim Square. Turkey banned May Day celebrations in Taksim after 36 people were killed May 1, 1977. The incident is considered a significant factor paving the way for the military coup in 1980.
Haberle ilgili daha fazlası: