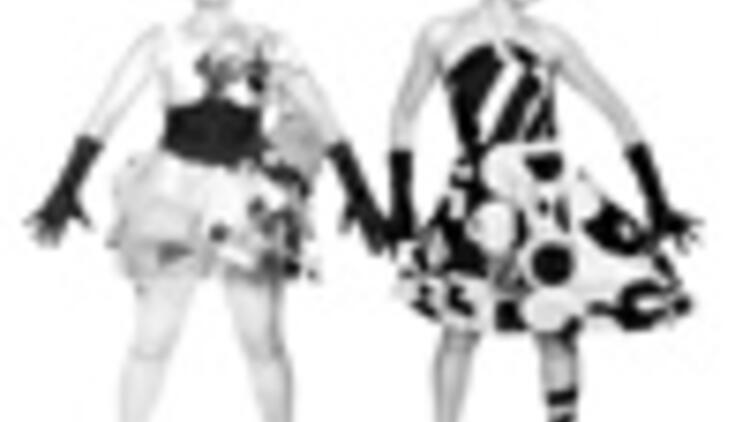 ISTANBUL - Begun as a fake band by two bored art students in Munich during the 90’s, over the years Chicks on Speed has become a multi-discipline art project.

First they played on a shoe, then a pair of scissors transformed into instruments. After that they projected a video of themselves crawling naked on the floor and finally they performed their famous electro pop sound, "We don’t play guitars". For the German band’s show last Wednesday at Istanbul’s "Babylon," there was no doubt among the audience that they were witnessing Chicks on Speed.

Started as a fake band by two bored art students in Munich in the 90s, over the years Chicks on Speed became a multi-discipline art project. In an interview with Hürriyet Daily News & Economic Review Sydney-born band member Alex Murray-Leslie said: "In school they taught us ’you have to stick to your style’. That is so provincial. We wanted to reach the masses and try different things". Following this motto, the Chicks on Speed project became a synthesis of music, design, art and fashion.

The band became famous for their various "do-it-yourself-"styles at an incredible speed. Seven released albums, a concert at the Museum of Modern Art in New York, their fashion shown in Paris and on the front pages of magazines, such as The Face, and moreover collaboration with German designer Karl Lagerfeld accelerated their success.

But what do these two girls want to express with their art? According to them, Chicks on Speed is an innovative movement of feminism. Logan said: "Feminism did always come from an ivory tower, but we have humor instead and we take it back to the street. We don’t do anything intellectual, it’s street-style pop feminism".

According to Logan, there is a war between the street and the ivory tower of feminism. "We got criticized a few times, for example by a university in Vienna", she said, "but in Germany, where feminism was a swearword for a long time, an interesting dialogue started and brought up new voices". For their latest project, the Chicks entered the surfing scene. In collaboration with an Australian fashion label, they created a whole surf and beachwear collection for girls. Moreover, as multi-discipline artist, they created a song called "Super Surfer Girl," which comes with a fancy video showing surf babes taking over the long time male-dominated sport.

"It’s homage to the pioneers of female surfing," Murray-Leslie said. Once again, the new song is a proof of the band’s creative diversity and it is impossible to put them into any box. Having started with minimal electro in the 90s, "Super Surfer Girl" is more like a kitsch pop song. A new album will follow in spring this year and tell more about the development of the Chicks’ sound.

Playing on objects such as scissors and shoes, last week’s performance in Istanbul, which was organized by the German Goethe-Institute, provided an insight into their new project. "Object instruments" is what they call the new idea and according to Murray-Leslie, a book about it will be published later this year. Even though Chicks on Speed started as a student project over ten years ago and Murray-Leslie and Logan are nearing 40, it seems as they have not lost any of their spirit just yet. "It becomes a life-time project," Logan said, "but when we are grandmothers, I guess we really will have to take speed in order to match our name".