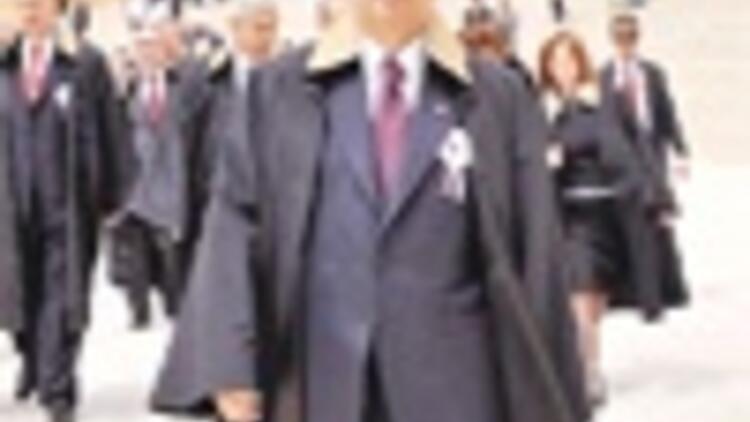 ANKARA - An amendment that poses a threat against secularism could not be protected under international law or the universal principles, says Mustafa Birden. Secularism is one of the leading elements that should be protected while preparing the constitutional amendments

As the government prepares for a new package of constitutional amendments, the top judge of the administrative court urged the ruling party to keep away from changes that would undermine the principles of secularism.

"Any amendment that will harm our republic’s basic principle of secularism and secular educational institutions has no place in our domestic law," head of the Council of State Mustafa Birden said, speaking at the ceremony that was held yesterday to celebrate the Council of State’s 141st anniversary.

Birden said an amendment that poses a threat against secularism could not be protected under international law or the universal principles. Recalling that secularism forms the basis of human rights and freedoms, and makes the state stand at equal distance from different beliefs, Birden said secularism was one of the leading elements that should be protected while preparing the constitutional amendments.

Though the government is studying draft amendments, its failure in getting the backing of opposition parties in Parliament will make the process difficult.

"It is not possible to say that the latest constitutional amendments fulfilled the expectation for social negotiation or were actualized without haste by informing the public opinion," he said, adding that these amendments had legal and technical deficiencies. Birden referred to 2007-dated amendments allowing the wearing of Islamic headscarves at universities that were later annulled by the Constitutional Court on the grounds that it was contradicting the secularism principle of the Republic. Amid the reactions by the military and civil society, the chief prosecutor demanded the closure of the ruling Justice and Development Party, or AKP. The party narrowly escaped the closure in 2008.

Amendments
Birden said their task as a constitutional institution is to submit their offers on the constitutional amendments to the interest of authorities. "Our offers and statements about the amendments should not be considered as an intervention in the legislative body’s field of activity," he said, stressing that they had no other aim but to fulfill the missing parts of the state of law and judicial independence.

In his speech, Birden referred to the ongoing Ergenekon case, which has led to the detention of many journalists, politicians, academics and retired generals. "Prosecutors, who undertake an important role in terms of distributing justice, should carry out their investigations in strict privacy, considering not only our domestic legislation but also the universal principles of the law, which are stated in the United Nations’ Guidelines on the Role of Prosecutors," he said.

Birden said prosecutors should technically examine the legal subjects and pay attention to the presumption of innocence. "They should not use evidence that is acquired through illegal ways or that violates human rights," Birden said, noting that prosecutors should act according to concrete evidence that the law accepts.
Haberle ilgili daha fazlası: