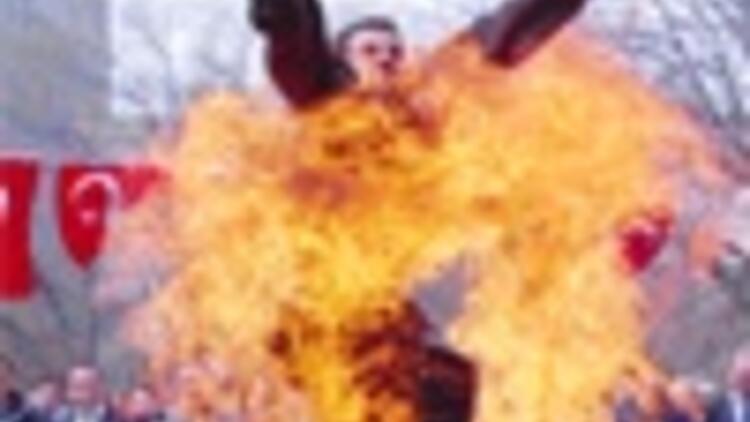 ISTANBUL - Few days of the year have more historical significance than the current turning point on Earth’s orbit: spring equinox. For many people in Turkey and its near abroad, the day is celebrated as a new year holiday and is recognized as the official birth of spring.

Turks call it Nevruz, which this year will fall on Monday, March 23, but it is also known as Newruz to the Kurds and many people across the Middle East. It is an ancient holiday based on astronomical calculations. Ancient night-sky observers were experts because it was essential to calculate when plants would appear, when a crop should be sewn and when the ceremonies customarily held on special dates such as the spring equinox should be carried out.

Very little is known about the origins of the celebrations. The first time they appear in historical records is in regard to celebrations in ancient Persia. Even then the roots cannot be determined with any certainty because of earlier civilizations that arose in China and India. It is also known that Incas in ancient Peru celebrated the spring equinox.

Western historians believe that the festival originated with the Zoroastrians who followed a religion and philosophy. The dates for the appearance of this monotheistic religion vary widely from after 330 BC to 6000 BC. However there was a belief among the Persians that this day was the first day of the New Year, hence NawRuz (naw, new; ruz, year) and the belief continues.

One cannot underestimate that significance of this because this seems to be a time of celebration that spread to many other countries in the vicinity of Persia. Nowruz is celebrated in Greater Iran, Caucasus, Central Asia and by Iranians worldwide. It is a public holiday in Iran, Azerbaijan, Turkmenistan, Tajikistan, Uzbekistan, Afghanistan, Kazakhstan, Kashmir and Kyrgyzstan. Iran also celebrates it as their New Year’s Day.


Additionally the Nowruz is also celebrated by Kurds in Iraq and Turkey and among some of the Alevi groups.

The Turks believe Nevruz originated at the time when their ancestors finally escaped from the mountains of Central Asia. Ergenekon is a legendary place located in the inaccessible valleys of the Altay Mountains where the Turkic peoples were first gathered. [Today it has a far different connotation as it has been applied to an alleged conspiracy of prominent people in Turkey to destabilize the country.] The Kurds consider Nevruz their day of liberation from oppression as expressed in a legend about the evil king Dehaq being overcome by the Blacksmith Kawa who subsequently led the people through Ergenekon Mountain to freedom.

One of the main concepts of Nevruz is the importance of light. It is a victory of a god of light over the powers of darkness, a basic tenet in Zoroastrianism. We see a similar belief in Greek mythology when a god or goddess descends into Hades for three days. Persephone comes to mind, the Greek girl who marries the god of darkness and can leave to return to the surface of the Earth but she mustn’t eat anything. Finally she can’t bear it and eats six pomegranate seeds. From then on she can only stay on the surface for six months and the rest are spent underground.

Zoroaster is supposed to have preached in the royal court of Bactria. He preached that there were two forces in the world, good and evil, and that they were in combat with each other. There was no life at that time but eventually there was and when the cycle of life began it was termed the new day or Nevruz. It is the ceremonial rituals and traditions surrounding this cosmology that form the roots of Nevruz.

How the celebrations were held in the first days is unknown with the exception of lighting bonfires. Leaping across them would be part of a purification ritual in which everyone would be rid of their illnesses or bad luck. They would also demonstrate their bravery and agility at the same time. In addition to that, eggs formed an important part of the rituals with eggs being dyed yellow, green and red. These are the three colors associated with today’s Kurds.

Today lighting bonfires is usually done outside of urban areas to prevent any serious fires breaking out. The festivities might continue over several days starting from the time of the equinox but usually between the 20th and 24th of March. In Iran this occurs over 12 days and in Azerbaijan over four weeks. Since it was related to purification, people would bathe and then put on new clothes; over time bathing as part of the tradition was eliminated but the donning of new clothes continues as it represents freshness and the new.

The cleansing ritual became a serious spring-cleaning as well with almost every household in Persia participating. Then on Nevruz Day, people would put on their new clothes and visit elder members of their families and friends.

Coming to Islam, these celebrations have nothing to do with the Muslim religion but rather are connected with folk traditions. That doesn’t mean there weren’t any thoughts on the issue. Since at the equinox day and night are of equal length, Islamic belief is that was the way the Earth was created and so celebrating the equinox is to celebrate the creation of the Earth. Similarly when Allah started the stars turning, that is considered the New Year and celebrated as such.