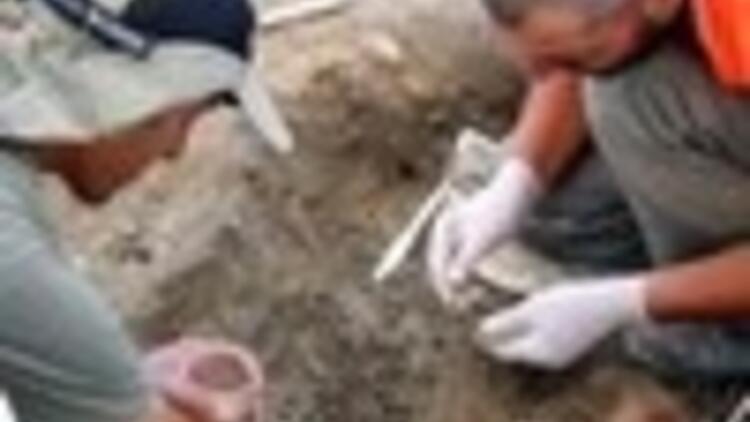 ISTANBUL - 'Urn' type, 8,000 years old graves found at the Marmaray diggings at Yenikapı, Istanbul. Dr. Karamut, director of Istanbul Archeology Museums and the head of the excavation said the digging will continue as hand- operated for now

Construction on the new metro tunnel, which goes under the Bosporus and will connect the Asian and European sides of Istanbul, has uncovered 8,000-year-old cremation urns from the Neolithic Age.

The urns were found in the everglade at Marmaray, before heavy machinery was due to start excavations. The urns are a first in Anatolian history, which proves human tribes lived in Istanbul before the reigns of Roman, Byzantine and Ottoman Empires.

Experts said the urns were a sensational find and Dr. İsmail Karamut, director of Istanbul Archeology Museums and the head of the excavation, said the digging would continue using hand operated tools from now on. Permission to recommence the use of heavy machinery will be decided at a later date. In ancient times, most funerals were held by simply burying (inhumation) or by burning the body (cremation). After cremation the ashes are usually put in ceramic urns or small stone containers, known as “larnax”.

The clothes and jewelry of the deceased were put in containers alongside the urn along with other possible items. For instance, if the deceased was killed by an arrow, the arrow would be included as well. The known forms of cremation in Anatolian Archaeology were seen in the early Bronze Age, but this type of burial was uncommon at Neolithic age excavations that date back 8,000 years.

Inside the urns, ashes wrapped in cloth, daily used dishes and the private belongings of the deceased were found. One urn found contained the skeleton of a baby. Experts said it was very likely this area was a burial site. The theory constructed for previous findings, that they may have been moved to this location by movements of a stream bed is no longer viable.

Archaeologists working at the site said after these extremely important findings, the idea of letting heavy machinery operate on the site should be discarded. The crematorium itself may be reached if digging was to continue, according to archaeologists.

Dr. Karamut said the urns were definitely very important findings but added, “It is too early to talk. The dig continues. We will share the results with the public in the upcoming days.  I have seen the artifacts at the site. On Monday, we will bring geologists there”. Karamut said after the examinations, the excavation would continue before they had an evaluation.

Associate Professor Necmi Karul, branch chairperson for the Archeologists Community in Istanbul, said, “In Anatolian archaeology, there were no urn burials from the Neolithic Age. It is an extremely sensational find. It is definitely a burial site because they are side by side. They date back to 5800-6000 BC, the last of the Neolithic Age”.  Karul also said the head of the excavation should be congratulated for not stopping the diggings.