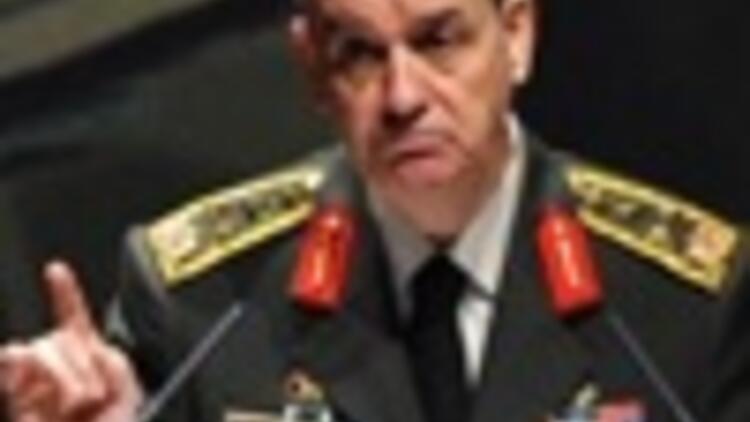 ISTANBUL - In a rare speech yesterday, Turkey’s top general outlined the renewed doctrine of the Turkish Armed Forces, including various “firsts” dealing with some of the most sensitive issues in the country.

Speaking yesterday at the War Academy in Istanbul, Chief of General Staff Gen. İlker Başbuğ suggested ways to build healthy relations between the military and the government, used the phrase “the people of Turkey” instead of “Turks,” stated that cultural identities should be protected and emphasized that the military has never been opposed to religion, only its abuse by politicians.

Contrary to expectations, Başbuğ’s speech did not address the Ergenekon investigation, which has seen dozens of officers and retired generals arrested due to their alleged links with an organization aiming to topple the pro-Islamic Justice and Development Party, or AKP, government between the years 2003 and 2004. Başbuğ said, however, he would publicize his opinions on current issues in another press conference next week in Ankara.

“I will try to look into the issues of civil-military ties, the fight against terrorism, democracy and secularism from an academic perspective,” Başbuğ said at the beginning of his speech, in which he referred to prominent international philosophers and writers including Samuel Huntington, Max Weber and Montesquieu.

After explaining that being a soldier is a profession and constitutes a way of life for officers, Başbuğ touched on the importance of confidence and reliability between civilian and military leaders.

“In each country, the decision-making mechanisms and the sharing of authority and responsibility between the military and civilians are executed in line with the country’s constitution and rules,” he said. “The political and institutional culture, the security environment and social perception determine this process. That is why the military-civilian ties in a specific country should be analyzed in accordance with the country’s specific conditions.”

The civilian-military relationship in Turkey is often problematic, with the powerful military frequently interfering in politics, staging coups in 1961, 1972 and 1980. The European Union has pressed Turkey to harmonize its rules with those of the EU, finding unsatisfactory the steps the government has taken thus far to decrease the military’s influence in politics.

"The responsibilities of the military leaders are important," Başbuğ said, emphasizing that "the concerns and recommendations of the military should be taken into consideration by the civilian authority."

"This is the key point in maintaining healthy relations between military and civilian leaders," he said. "Of course, the final decision belongs to the civilian authority. However, politicians would be responsible for any outcomes that may emerge from a failure to consider sincere and realistic recommendations made by the military."

Noting that the military always ranks atop the most trusted institutions in Turkey, Başbuğ drew attention to the efforts of two groups that are trying to undermine the military’s credibility. According to Başbuğ, ill-intentioned groups are carrying out smear campaigns against the military to try and paint the army as anti-democratic and anti-religion.

"The pious parts of our country love their army and trust it," he said. "The army of the Turkish people is the nation itself. It comes from the nation and is for the nation."

In the second part of his speech, Başbuğ looked into the fight against terrorism and emphasized that the struggle against the outlawed Kurdistan Workers’ Party, or PKK, was not an ethnic conflict. Underlining that the Kurds of this country live together with the rest of the nation and share a common future, Başbuğ also denied that the state was implementing an assimilation policy.

There is nothing wrong with Kurds asking to enjoy their cultural rights but the appeal of the secondary identity should not dominate the common and upper identity, Başbuğ said. "You cannot get a solution if you just embrace your secondary identity," he said.

"If we have some integration problems today, we have to ask ourselves about them. To what extent can we be successful in the integration process? Without barring them, the process should allow integrating all cultural identities."

The top general said the secondary identities, what he calls cultural freedoms, should be protected. "But we cannot create new upper identities or minorities. Otherwise we’ll find ourselves in the position of Iraq, Lebanon and some Balkan countries," he said.

Başbuğ’s remarks came a week after U.S. President Barack Obama called Kurds minorities in his address to Parliament. But Başbuğ also said the state should work more in East and Southeast Anatolia to create a window of opportunity for Kurds.

In the last part of his speech, Başbuğ talked about the secularism principle of the state and its importance for democracy. He recalled Obama’s address to Parliament where he praised Atatürk and said: "His greatest legacy is Turkey’s strong and secular democracy, and that is the work that this assembly carries on today."

Describing Obama’s praise for the Turkish model as something more than an effort to be sympathetic to Turks, he said it was actually an attempt to solve the problems of the United States in the international arena. "Turkey’s power is its democratic and secular structure," he said. "Secularism is the fundamental pillar of the founding philosophy [of Turkey]. A modern republic can only be possible with democracy," he said.

Responding to the claims by religious groups, Başbuğ said: "The military has never been against religion. What we oppose is the abuse of religion for personal and political interests," he said. "Arguing that secularism is against religion and saying the military is an anti-religion institution is the gravest unfairness against Atatürk and his military."

Başbuğ also affirmed that the military would forever protect the Republic’s main pillars of secularism and democracy. "We would have no single problem if we would all embrace Article 24 of our Constitution," he said. This article bars the abuse of religion for political gains.

Başbuğ informed the audience about the current situation in the fight against the PKK. "The PKK is no longer able to operate freely in northern Iraq and are struggling with internal conflict," he said. "The separatist terror group is now losing blood."

The PKK can no longer move about in large groups in Turkey or in the largely autonomous Kurdish region of northern Iraq and is experiencing command and control problems, Basbug said, adding that the PKK was also being hampered by measures to cut off financial resources in Europe. "There are problems in the leadership of the group. The group's morale is low. Its recruiting level is not at the level sought by the group and people continue to abandon it," he said.