Conditions are harder for women in the varoş 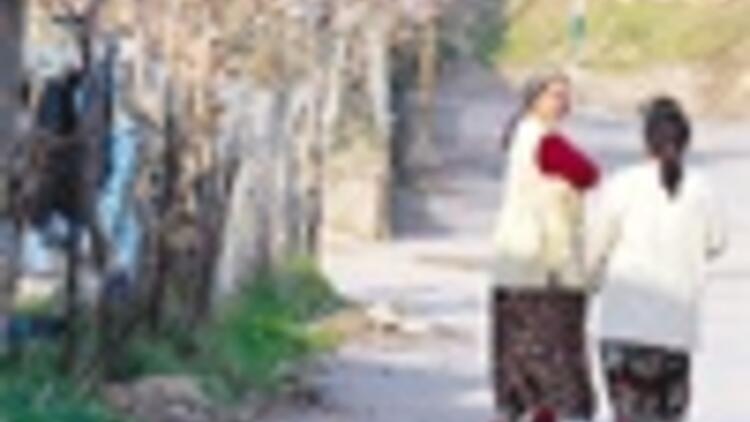 ISATNBUL - Most of the young women in varoş start working at an early age. While their income is vital for the livelihood of the family, they are subjected to strict rules in their daily lives. Some are not allowed to even wear makeup. But for some work also proves to be a door to a freer world.

The door to a three-story building in the Gazi district of Gaziosmanpaşa opens to a textile workshop. The rules for workers are the first thing that hit the eye when entering the dark space. "Failing to show up for work results in a three-day pay penalty," "Mobile phones are forbidden during work hours," "Not clocking in is considered absenteeism." The 19 people in the workshop are hard at work.

Some of them are children while others are of college age. They have been making a living by working 10-hour shifts per day for years. They barely survive the month with what they earn and their future is uncertain. They have no employment insurance. Aysel Erol, 19, left school after the eighth grade and she supports her family of 13 with her older and younger brothers now.

Her family migrated from Mardin and struggled to survive in Bursa first. Five years ago, they moved to Istanbul. Erol says she would like an education but has to work because of financial difficulties.

"We are five brothers and two sisters. I make YTL 500 a month. My brother works in the cafeteria of a hospital. He makes YTL 450. My little brother also works at a textile workshop in Bayrampaşa. His wage is YTL 350. Do you think maintaining a family of 13 is an easy thing to do? I carry a big burden on my shoulders," she said.

Aysel has not seen any of Istanbul except Aksaray, Pendik and Eminönü where she went to visit relatives and attend weddings. She cannot even wander through the Gazi district she lives in because "the relatives may see and they might say something." She is only allowed to gather with her friends to listen to music on her off days. Her dream is of becoming rich and founding a nursery.

Some work while attending school
Serap Demir, 17, has been working at textile workshops since she was 13. She, too, quit school while in the eighth grade. She is trying to graduate from open high school while she is working. She and her father support the family of five, which migrated from Siirt 17 years ago. Serap is the middle child of the three and the only one who did not continue her education. She quit school when her father was sick and started to work regardless of her family insisting otherwise. Now she says, "Let not my siblings turn out to be like me." Serap is allowed to wander around when off duty. She says she is also allowed to wear makeup when going out and tells about the places she wants to see and her dreams. "We go to Esenler to visit my grandmother on weekends. I went to my hometown for holiday before. God willing we will go again this year. I would like to see Cappadocia and Pamukkale. I have a feeling that I will save myself. If only I could finish open school and become a teacher ... I used to fall into depression and lock myself in my room sometimes. ’Why do we have troubles?’ I used to ask myself."

Nurgül Çınar is 24. She paints a different picture among the girls with her polished nails and eyeliner. She quit school after the fifth grade. She has been working at workshops for nine years. However, working means not only sustenance but also freedom for Çınar. She says she wanders around Taksim and Şişli on her off days. "My family migrated from Siirt. My three siblings have married and left us. I live with my mother and father. I have my own freedom. I can walk around with make up. My family does not get upset. I also go out with my boyfriend. Our dream is opening a cafe together. We are saving money for that."

Saniye Kavas’ life provides another example of the situation of women in the varoş. Originally from Tokat, Kavas left her husband, who she had married in a religious ceremony, 12 years ago after he brought home a second wife through a civil marriage. After leaving the father of her three children, she married Hayati Kavas, a man from the same region as her in Istanbul, but in an officially unsanctioned religious ceremony.

Not a single record for child’s birth
For seven years now, she has been living in a two-room shack with her husband, her husband’s son and the son’s wife, her 9-year-old daughter from her first marriage and her 18-month-old son from her second marriage. Although her daughter is nine, she does not have an identification card and has never attended school. The couple has registered for a mass wedding ceremony to be organized by the municipality. When they are officially registered as married, her second husband will adopt her daughter.

They earn their living by collecting paper and tin. From one neighborhood to another, they roam Istanbul in their ancient car, making a living from collecting trash. They hit the road at 6 a.m. and work until 8 p.m. Their shifts are long, but their income is low. They make YTL 500 a month if they manage to gather three tons of junk. They have no social security.

According to Hayati Kavas, Istanbul is miserable for them. He has been a waste collector since he came to the city 40 years ago, aged 8. "We have to do this. We do not have a profession," he said. His dreams were lost among the junk years ago, he said, adding that they could not have dreams, even for their children. All Saniye Kavas wants is for her children to have a job in the future that society will appreciate.Varoş clings to rural mores, values

Living in big cities does not lead to urbanization and modernization of lifestyles as is generally assumed, recent research has revealed.

On the contrary, lifestyles in rural areas continue in almost every field of urban life with nearly the same habits and behavioral patterns. The results of the research by Konda, a well-known research company, showed that lifestyles and behavior patterns in varoş, which are poor outer suburbs where migrants first settle, are similar to those in villages. But this does not apply to younger generations. In the varoş, serious differences are seen between groups of people over and under the age of 35.

The situation among women is one of the most concrete showcases of how rural lifestyles are maintained in urban centers. Being a woman is perhaps the hardest thing to be in a varoş. The conditions of their home villages remain unchanged especially for the women. It can be said that women in varoş are identified based on traditional rather than religious aspects, which forms a rather conservative attitude. For example, "request for official marriage" is highest in varoş but they are also the places that have the most negative approach to "women not asking for permission to work" and "the family properties belonging to a woman." Again, the varoş are where it is believed that "the wife making more money than the husband creates problems." Their acceptance of abortion and invitro fertilization are also below the national average. "Wearing a sleeveless shirt" or "wearing makeup" is a rare thing in varoş. Women who have never worn a sleeveless shirt make up 60 percent and the rate climbs with those who have never worn a bathing suit, which stands at 71 percent. Women in varoş who have never worn makeup amount to 49 percent. Among people under the age of 35 wearing makeup or a sleeveless shirt may be seen from time to time but as the age rises; they become more conservative about clothing and makeup.

The varoş are distant from cultural activities. More than half the population has never been to a theater play or the movies. They only follow the nearby richness through television. Besides, television is the primary source of entertainment for most. Following and buying new technologies and products on the market is also rarely seen, but Internet usage is common among the youth.
Haberle ilgili daha fazlası: