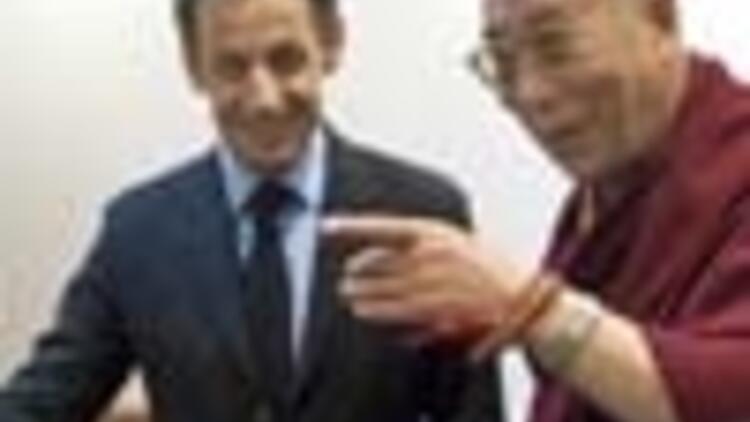 Beijing brands the Dalai Lama a dangerous "splittist" for demanding self-determination for Tibet and was incensed by Sarkozy's meeting on Saturday with the 73-year-old Buddhist monk.

Sarkozy told the Dalai Lama at their meeting in Poland that Europe shared his concerns over his homeland, which the Dalai Lama fled after a failed uprising against Chinese rule in 1959.

Chinese Vice Foreign Minister He Yafei on Sunday said it was up to France to "fully understand the damage" done to relations by Sarkozy, who holds the rotating presidency of the European Union until the end of the year.

Now the overseas edition of the People's Daily has again warned that China will not easily forget the meeting, accusing Sarkozy of opportunism and trampling on China's interests.

"He ignored China's repeated entreaties and stubbornly refused to shift, plainly determined to step over China's red line," said an editorial in the newspaper, which acts as the voice of the ruling Communist Party.

The Dalai Lama has met many other Western leaders, including U.S. President George W. Bush. But China appears increasingly impatient with Western pressure over Tibet, occupied by People's Liberation Army troops from 1950. And it appears especially angry that Sarkozy met him while holding the EU presidency.

China has not said how it may seek to punish or pressure Sarkozy. But the friction could make it more difficult for China and Europe to cooperate smoothly in dealing with the global financial crisis and efforts to revive stalled global trade liberalization talks.

The People's Daily said Sarkozy's action would "ultimately damage the whole interests of the French people and the European Union".

China abruptly pulled out of a summit with EU leaders but has avoided any talk of sanctions or boycotts. Chinese internet calls to boycott French-owned stores over the weekend came to nothing.

The European Union is China's biggest trade partner and France is eager to sell China products ranging from nuclear power technology to luxury goods. Sino French trade grew to $32.5 billion in value in the first 10 months of this year, a rise of 21.6 percent on the same period last year, according to Chinese customs numbers.

On Monday, Chinese inspectors said they had found "quality and safety problems" with many European foods products shipped to China, the central government website (www.gov.cn) reported.

The products sent back or destroyed included Italian brandy, British sauce and Belgium chocolate, but not any French goods. There was no suggestion in the announcement of any link to Chinese anger with the European Union.

The People's Daily editorial accused Sarkozy of staging the meeting to shore up his domestic political position.

"Sarkozy is having a hard time of it. The economy is in decline, unemployment has jumped and his public approval ratings have slumped," said the paper. "So Sarkozy has seized upon human rights and Tibetan issues, wanting to stir things up to divert public attention."