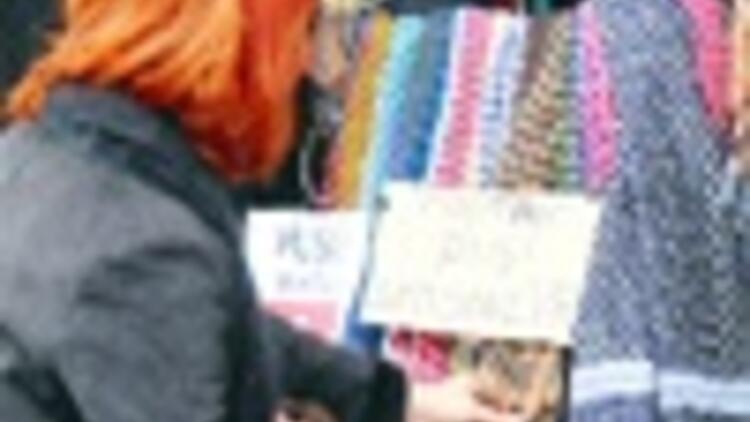 ISTANBUL - The fashion world's appropriation of political icons is hardly novel. We have seen Che Guevara T-shirts and Mao bags in hipster clothing stores before.

Yet another fashion trend has "wrapped" up the streets of Istanbul with its colorful look lately. Puşi, the traditional Kurdish scarf or its Palestinian version, keffiyeh, is now covering the necks of trendsetters throughout the city.

"I bought mine for YTL 25 from Mahmutbey," says Özhan, a 22-year-old designer. "But I bought it seven or eight months ago, before it became such a hit."

"I realized that it would became the trend, so I bought one as well," says Seda, an 18-year-old university student who wears a yellow and black scarf. "I did not know what it was, I just liked it so I bought one."

The checkered patterned scarves are originally made from cotton, in black and white, or red and white. Puşis are folded and wrapped in various styles around the head in eastern and southeastern Turkey, and the Middle East. The scarf is most commonly worn by men for protection of the mouth and eyes from dust and sand.

"In my city only men wear them. It is a traditional thing," says Emrah, from Sivas. When asked why he was wearing a scarf, he said, "I wore it today because there is a Besiktas game [a Turkish soccer team with black and white colors], I wanted to support them."

The traditional puşi might be more popular among men, but the new trend seems to be more popular with young women. When a street vendor Mehmet was asked why the scarves were popular with women, he said, "It is because Angelina Jolie wore a scarf one day. Now all the girls want to buy one. Originally it is black and white, or red and white, but we have them in every color because girls like color." he said. "At least 300 puşis are sold each day in Taksim. We get them from Eminönü, but I know they are produced in Syria."

Mehmet sells his scarves for YTL 10, but other brands do not sell the scarf that cheaply. Bigger stores such as American Urban Outfitters, which have marketed the scarves as "anti-war" symbols, sold them for much higher prices. There was controversy in 2007 when the store faced protests by the Israeli community for promoting sympathy with Palestine. After criticism increased, Urban Outfitters had to stop selling the scarves.


Arafat's symbol
The Palestinian version of the puşi, the keffiyeh, carries a political message, worn by Palestinian peasants as a symbol against British rule in the 1930s. In the 1960s the scarf was identified with Arafat, who led the Palestinian resistance movement for many years.

Another figure identified with the keffiyeh was Leila Khaled, a member of the Popular Front for the Liberation of Palestine. In 1969, Khaled’s face, wrapped in her keffiyeh, was published in magazines when she took part in the hijacking of a plane, to raise awareness of Palestinian independence. Today, the keffiyeh is still the most recognizable symbol of the Palestinian independence movement.

"It was such a political symbol in the 1970s," says sociologist Nilüfer Narlı. "You could not wear one and walk down the street. Now many people wear it as a fashion item. It has lost its political meaning."

Keffiyehs are not the first traditional clothing item to become a fashion product, nor they will be the last. As the industry continues to tap into our subconscious desire to become trendy revolutionaries, we will see many more.