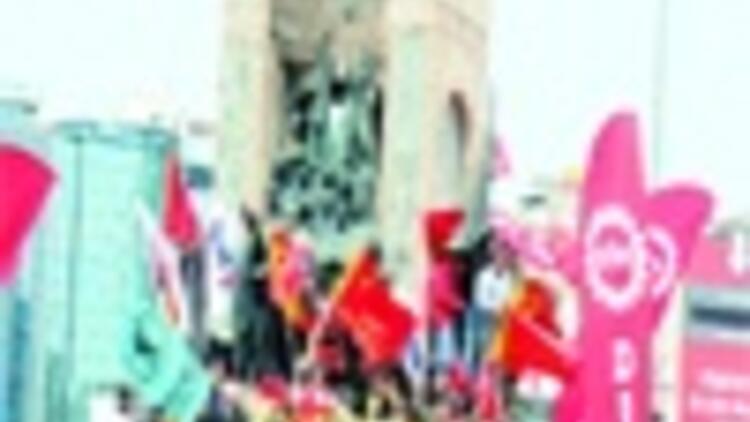 ISTANBUL - Trade unions and workers celebrate May Day in Istanbul’s Taksim Square as police battle troublemakers on the side streets. In a historic march, laborers walk into the square on May 1 for the first time in 31 years.

After days of debate over where to celebrate May Day this year, trade union members, students, workers and political party members gathered in Taksim Square on Friday for historic commemorations of the 1977 May Day tragedy.

The right to hold celebrations at Taksim Square and how many people would be allowed were the main flash points of the May Day debates between the government and trade unions. Part of the deal for Taksim activities was that there would be a “reasonable number” of demonstrators.

Taksim Square has been closed to May Day demonstrations since 1977 when 36 people died during May Day celebrations after shots were fired on 500,000 people gathered in the square.

This year Taksim Square hosted around 5,000 people and later in the day President Abdullah Gül declared the size was reasonable. The Revolutionary Trade Unions’ Confederation, or DİSK, the Confederation of Public Employees’ Trade Unions, or KESK, and the Turkish Chamber of Architects and Engineers, or TMMOB, lead the marchers.

Early Friday morning demonstrators gathered in the Pangaltı neighborhood to march to Taksim, where police had taken stiff security measures, including blocking vehicle traffic from 3 a.m. and closing the intermediary roads that feed into Taksim. While the assembly was waiting to start the walk, small groups clashed with police in nearby streets. As the demonstrators and trade union leaders walked the streets, the police did not stop them from entering the square. However, the police prevented people on the side streets from entering the square and taking part in the demonstration.

Apturrahman Gençoğlu, a 47-year-old member of the political group Halk Evleri, was in front of the procession in his wheel chair. Chanting slogans and singing songs, Gençoğlu said potential events that could erupt on May Day did not scare him away. “Can a person be afraid when a 21-year-old went to the gallows with no fear while chanting slogans,” Gençoğlu said, referring to socialist youth leader Deniz Gezmiş who was executed in 1972.

Prominent academic and columnist at daily Cumhuriyet Server Tanilli was at the front of the march in his wheel chair as well. “I am so happy to be here. May Day is celebrated despite every kind of restriction. But I would like it to be celebrated in a more free way,” he said.

The crowd protested Istanbul Police Chief Celalettin Cerrah when he passed nearby. Not only police but journalists also used gas masks to avoid tear gas. Less tear gas was used this year compared to the previous two years. Some demonstrators used diving masks to avoid the gas. Even a döner shop worker at Taksim Sqaure had a gas mask. A young woman, Aygül Toprak, was hospitalized after a stone hit the back of her head on Cumhuriyet Street, near Taksim. Her health condition was not serious.

The demonstrators entered Taksim Square around 12 p.m. and gathered in front of the Kazancı Slope, where the majority of the deaths occurred on May 1, 1977. The 1977 deaths were a result of gunshots being fired over the crowd of around 500,000, causing many to run in panic to Kazancı where some were trampled to death in the small passage. This year’s gathering stood in front of the street for a moment of silence for the victims.

“Everyone in this square should be proud of themselves. You came here by deciding to take action. Today [the debate] was locked at what is the ‘reasonable number.’ Not numbers but people should be reasonable,” said DİSK’s leader Süleyman Çelebi in his speech. Freedom and Solidarity Party, or ÖDP, deputy Ufuk Uras, Democratic Society Party, or DTP, deputies, Sırrı Sakık, Sabahat Tuncel, Aysel Tuğluk, Akın Birdal and Hasip Kaplan and Republican People’s Party, or CHP, deputies Mehmet Sevigen, Sacit Yıldız, and Bihlun Tamaylıgil were also in the group.

A group of around 300 people from the Turkish Workers’ Union Confederation, or Türk-İş, entered Taksim Square around 9:30 a.m. as the first group in Taksim. They walked up Barbaros Boulevard connecting Beşiktaş to Taksim followed by the Hak-İş union. One suspect was taken into custody during the Hak-İş gathering for trying to put a black flag on the statue of Ataturk. Otherwise the square was peaceful. Leaders from both groups gave short speeches and left commemorative wreaths on the Republic Monument in the square.

In Ankara, 15 police officers were injured as a result of a clash with demonstrators in Sıhhiye Square. The inured were taken to hospital and one of them was in critical condition. In a separate incident, a group of “paper workers” wanted to march toward Sıhhiye Square from the train station and police detained six of them when they insisted on marching.

In Istanbul, 25,000 police officers were on duty and 21 were injured and 108 people, 29 of them women, were arrested. Some citizens had minor injuries.

“The fringe groups who attempted to get to Taksim Square via the side streets were not workers or union members and the police successfully stopped them,” said Istanbul Governor Muammer Güler in a press conference Friday afternoon.