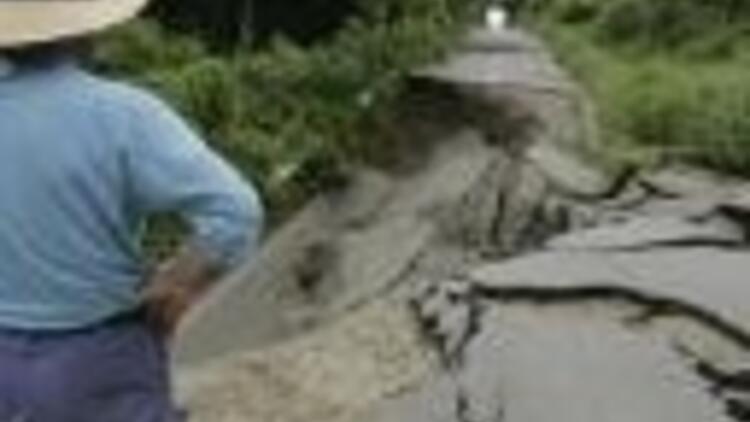 A 7.2-magnitude earthquake centered in the northern state of Iwate about 250 miles northeast of Tokyo, rocked a rural, mountainous area of northern Japan, killed at least five people and injured more than 200 on Saturday, TV channels reported. (UPDATED)

One of the people killed was caught in a landslide, Chief Cabinet Secretary Nobutaka Machimura told reporters. A second man was hit by a car after running out of a building, and a third was killed by falling rocks at a dam construction site.

A fourth person died when a car was buried under a landslide, a local official said. Two others were rescued and taken to hospital, but another car was still buried, he added.

Two people out of three missing at a work site in Kurihara after a landslide had been found and were in cardiac arrest, Reuters quoted a local official saying. Kyodo news agency said they were dead, Reuters also reported.

NHK national TV put the total death toll at five, with 202 people hurt and 10 missing as aftershocks jolted the region, hampering rescue efforts. Seven people were trapped in a hot-spring resort inn hit by a landslide but police had rescued five and were trying to get the other two out, NHK said.

The earthquake triggered landslides, stopped train service and knocked down a bridge. With roads closed, military aircraft and helicopters were mobilized to assess the damage.

The quake was centered in the northern state of Iwate about 250 miles northeast of , and was located about five miles underground. It was felt as far away as .

The earthquake, which measured 7.2 on the Richter scale, also caused a leak of radioactive water from a power plant, although the company said that the amount was so small that there was no cause for public concern, AFP reported.

There was no danger of tsunami, but several aftershocks, including one with a magnitude of 5.6, struck the area in the hours after the initial quake. The quake has been followed by more than 160 aftershocks.

Electricity had been cut to about 29,000 households in the quake zone. Its force has buckled countless roads, including one highway severed when a stretch of land collapsed, creating a cliffside.

Earthquakes are common in , one of the world's most seismically active areas. The country accounts for about 20 percent of the world's earthquakes of magnitude 6 or greater, prompting tough building codes to try to limit damage.