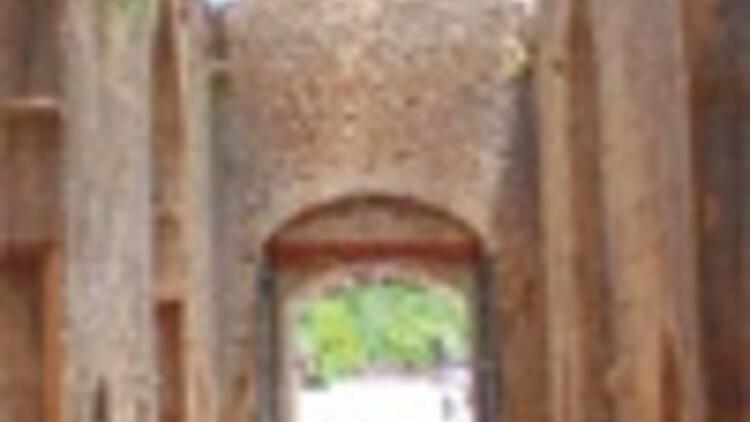 ALANYA - Alarahan, a historic caravanserai in Alanya once left to its fate, now serves as a beautiful tourist attraction and a heritage center and has added value to Turkish tourism. Noted for its marvelous construction technique, this exceptional architectural masterpiece is also included in the World Tourism Organization’s World Heritage List.

Alaeddin Kayqubad I is the most famous of all the Seljuk Sultans who reigned the Seljuk Empire between 1220 and 1237. Kayqubad was considered the most illustrious prince of the Seljuk dynasty.

One key element that brought him success was his approach to the trade dynamics of the era and his understanding of the famous Silk Road, which shaped world trade for centuries.

During his reign, Kayqubad sponsored a large-scale building campaign that included the reconstruction of the cities, construction of mosques, hospitals, bridges, madrassas and caravanserais, or traveler inns, many of which are preserved to this day. Among the three caravanserais he built, Alarahan is a unique and exceptional architectural masterpiece that lies on the banks of River Alara.

Located right underneath the Alara Castle and at a distance of only 35 kilometers from Alanya, Alarahan is referred to as the most famous and best preserved of all the caravanserais in Anatolia. Just 15 kilometers to the Mediterranean, Alarahan for centuries served traders and merchants who were destined to carry their goods on the Alanya / Antalya and Alanya / Konya / Ankara direction until the Silk Road lost its importance. Alarahan was turned into a dormitory for dervishes and eventually abandoned by the 19th century.

Built in 1231, Alarahan possesses one of the most complex and original plans of any caravanserai ever built. Standing on the stunning countryside, Alarahan is a distinctive example in terms of its construction technique, details carved to the structure and the dimensions and proportions calculated during its construction. The caravanserai is not large, but it is unusual when compared with other caravanserais of the era.

Today, Alarahan has become a beautiful tourist attraction and heritage center and has added value to Turkish tourism. The Foundations General Directorate, the official government body that is responsible for protecting Turkey's historical treasures, established a tender for the abandoned Alarahan for restoration and management a few years ago.

Pusat Mimarlık successfully won the tender and coordinated with restoration expert Fatma Eren, Professor Aysil Yavuz Tukel and Dr. Emre Madran and will run the Alarahan complex for the next 49 years. The owner of Pusat Mimarlık, Turgut Bakırel explains that Alarahan's renovation was conducted in accordance with "Venice Charter for the Conservation and Restoration of Monuments and Sites," which is a treaty that provides an international framework for the preservation and restoration of ancient buildings.

Bakırel adds that Alarahan's restoration was a part of the Silk Road Project, which has been signed by 76 countries. The restoration is the first completed project in Turkey and the first restored caravanserai in the world under the Silk Road scheme.

Thanks to the successful renovation, the World Tourism Organization has included Alarahan on its World Heritage List. The Alarahan complex is now generating a valuable alternative for the local tourism industry, adding value to each and every single investment in the area.

Alarahan is classified as "concentrically planned" because it consists of two rings surrounding a central core. Historians assume that the inner ring was reserved for travelers and goods and the outer ring for services and animal stabling. It had its own mosque, a hamam and a separate bath area that is not far from the main building.

Alarahan, among its many distinctive characteristics, stands as a perfect example of stone masonry of the time; it was constructed by carefully joint, accurately hewn limestone blocks with walls as thick as 2 meters. During its construction, each quarryman carved his mark on the stones they shaped either for payment purposes or according to some historians as good luck omens, yet it is unclear. But the quarrymen’s carvings quarrymen turned Alarahan into a unique architectural masterpiece as there are no other similar structures possessing such a variety of carving art.

Alarahan stands out not only with its construction technique and stone masonry but also with a highly developed decoration program within its interiors. One of the most significant decorative elements inside is the "Mukarnas," a triangular interconnected geometrical shape that has a face of a lion in the middle. According to historians, triangles symbolized protection and security in history; the "Mukarnas" signs in Alarahan's interiors symbolize protection against the wicked and harmful.

Where most caravanserais of the time were lit by small slit windows in the exterior walls, the lighting problem in Alara was resolved with some 79 lion head sculptures used as oil feed for lamps and candles. These lions are purposely built with sad appearances and known as "Anatolian Lions." The lions were used in the Alarahan because they symbolized the Seljuk power and can be seen in all Seljuk art.

According to local legend, the lions with sad expressions in Alarahan represent the homesickness felt by the travelers and merchants. The same legend reckons that the lions smiled when the merchants safely reached their destination. Despite the uncertainty about the reason for their sadness, they bring a charming appeal to Alarahan.

Alarahan can be accessed through the village of Okurcalar right after Manavgat on the Antalya-Alanya motorway. There are also other attractions in the area, including the Alara castle, the Alara River, restaurants and some shopping facilities. If you feel like spending a day away from the beach, Alarahan is the perfect option where you can relax by the refreshing winds that flow through the Alara River. There are also attractions at night, as the complex organizes Turkish nights within the caravanserai.