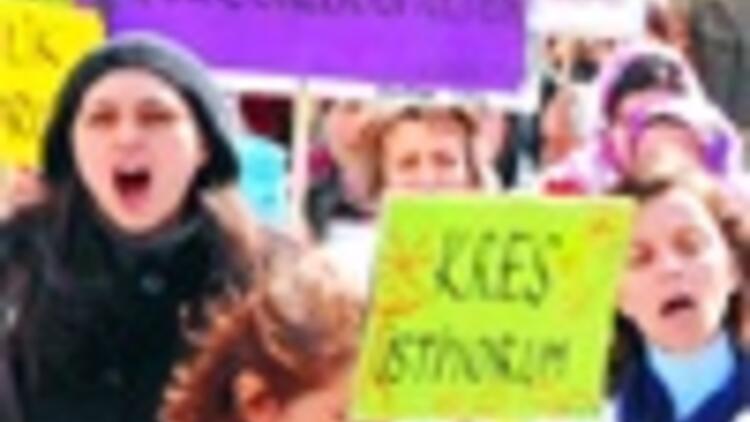 ANKARA - As thousands of women around Turkey celebrate International Women's Day yesterday, state officials marked the occasion with messages in support of their concerns.

In a statement, President Abdullah Gül said domestic violence should be stopped and more efforts were needed to secure gender equality.

"The discriminative implementations against women and domestic violence should be stopped," Gül said, noting that the women in Turkey gained important rights during the formation of the Republic. "We can look at the future more confidently once all girls can enjoy educational opportunities."

In an election-campaign event in Mersin, Prime Minister Recep Tayyip Erdoğan noted that among the 50 female deputies in Parliament, 30 are with the ruling Justice and Development Party, or AKP.

"Women are our mothers, the reason for our existence," Erdoğan said. "One day is not enough, all the days of the year are women’s days. I celebrate the women’s day of all women."

Republican People’s Party, or CHP, leader Deniz Baykal issued a written statement saying that women want jobs for themselves, their husbands and children and to be able to look at the future confidently.

"It is women who pay the price for poverty, unemployment and discrimination. They face violence," Baykal said. "But women, the vital actors of Turkey’s gaining its independence, were forced to stay at home by some pressures and bigoted thoughts. Women want an honorable life and a safe future. They don’t want to live on [state] aid."

President Gül’s wife, Hayrünnisa, also gave a reception at the Çankaya Presidential Palace for the women working at the palace as well as the wives of male personnel working at the palace. Moreover, the wives of commanders led by Sevil Başbuğ, wife of the chief of General Staff, Gen. İlker Başbuğ paid a visit to modern Turkey’s founder Mustafa Kemal Atatürk’s mausoleum, Anıtkabir, to mark the day. State Minister for Women's and Children Affairs Nimet Çubukçu agreed that women’s participation should be encouraged and strengthened, saying that there are fewer female politicians because women have shown less willingness to engage in politics.

Meanwhile, many women voiced their concerns in a series of demonstrations across the country. Gathering in Ankara’s Sıhhiye district yesterday, women said they wanted an end to all types of discrimination and sexual abuse. They said that women were occupied with domestic work at home, seen as a means of production by some political parties and often have to do the same job as men, but for less money. At similar events in other parts of the country, including İzmir, Edirne, Tekirdağ, Antalya, Manisa and Kastamonu, women voiced their demands for equal participation with men in every field of life.
False