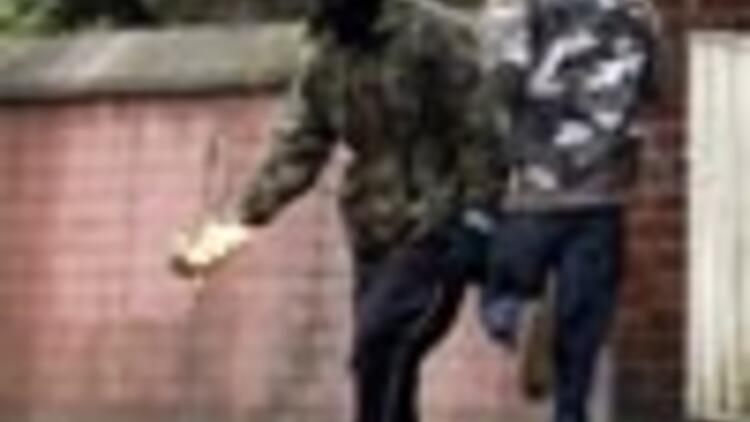 About 300 Irish Republican Army dissidents backed by "a few nutters and idiots" are trying to tear apart the peace process, Northern Ireland’s police commander said Sunday as his detectives interrogated nine people over the killings of two soldiers and a policeman.

Chief Constable Hugh Orde said two dissident groups, the Real IRA and Continuity IRA, were both "very dangerous, like any cornered animal in its death throes."

Orde said the dissidents had launched at least 25 attacks, chiefly against police, in the past 18 months, leading up to last weeks gun attacks against off-duty, unarmed soldiers outside an army base and against police responding to an emergency call.

The three killings were the first of security forces in Northern Ireland since 1998, the year of the Good Friday peace accord between the British Protestant majority and Irish Catholic minority here that sought to end a three-decade conflict responsible for 3,700 killings.

The slayings are fraying nerves in thousands of households across , where current or former members of the police and army have lost their licenses for privately held handguns - another consequence of a peace process that aims to transform .

Arlene Foster, a Protestant member of ’s power-sharing government, called for retired members of the police and army to regain the right to carry a concealed gun. She represents a predominantly Catholic border area where the IRA long specialized in killing part-time Protestant security force members in their homes or on their farms.

"This is not a time for toning down personal security. It is vital that people are able at least to attempt to guarantee their own safety from the threat posed by these dissident republican murderers," Foster said.

She noted that IRA dissidents were willing to kill civilians who do business with security forces - a threat demonstrated when the gunmen who targeted British troops last weekend also shot and wounded two Dominos Pizza couriers bringing them food.

Orde said the Police Service of Northern Ireland, British domestic spy agency MI5 and British Army surveillance specialists have already identified many of the dissidents and were working around the clock "to disrupt and arrest them and lock them up for the rest of their natural lives."

Orde contrasted the dissidents’ political isolation with the long-dominant Provisional IRA, which built firm bases of support within the most militant Catholic areas during its failed 1970-97 campaign to oust from the . The Provisional’s formally renounced violence, disarmed and embraced power-sharing with Protestant leaders in 2005.

"We know that, unlike the past, there is no support at all for these (dissident IRA) groups within communities apart from a few nutters and idiots who have no political strategy in their tiny minds," he wrote.

Orde made his comments in a column published Sunday in a British newspaper, the News of the World.

Police arrested six more suspected IRA dissidents Saturday, taking to nine the number of people being questioned about the March 7 gun attack that killed two soldiers and Mondays fatal shooting of a policeman.

The arrest of a prominent Irish republican, 41-year-old Colin Duffy, triggered lengthy rioting and mob intimidation Saturday in the Catholic north side of Lurgan, a town southwest of .

Youths who support Duffy covered their faces with masks, scarves and hoods as they threw obstacles on streets and the main railway and tried to hijack passing cars.

Police said their officers - who operated from armored vehicles and donned flame-retardent suits and body armor during the unrest - had more than a dozen gasoline-filled bottles thrown at them. One officer was wounded when a brick struck him on the arm. Officers arrested two teenage rioters.

Police said they seized a gun and ammunition during raids on the homes of suspected IRA dissidents in Lurgan and its neighboring town of , where police Constable Stephen Carroll, 48, was fatally shot through the back of the head Monday.

Police long considered Duffy the Provisional IRA godfather of Lurgan and twice charged him with 1990s murders in the town.

Duffy was convicted of killing a former soldier in Lurgan in 1993, but was freed on appeal three years later after the key witness against him was exposed as a member of an outlawed Protestant gang.

He was back behind bars within a year after police charged him with committing the IRA’s last two killings before its 1997 cease-fire: two Protestant policemen shot point-blank through the backs of their heads while on foot patrol in Lurgan. That case against Duffy collapsed after the prosecutions key witness suffered a nervous breakdown and withdrew her testimony.