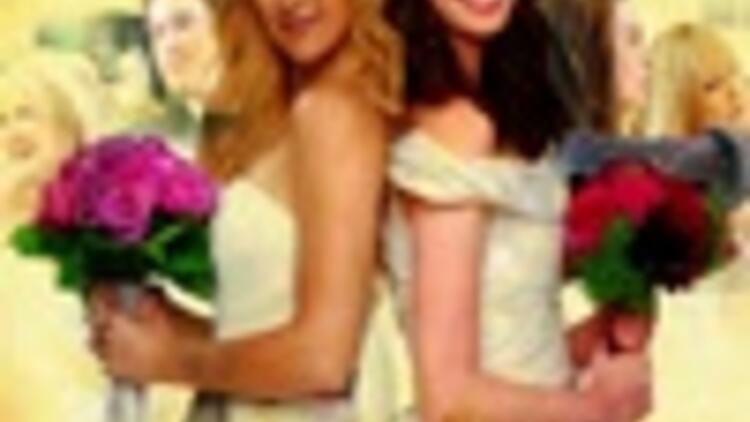 LOS ANGELES - In 'Bride Wars,' Kate Hudson and Anne Hathaway star as lifelong best friends who have obsessively fantasized about the ideal wedding since they were children in small-town New Jersey. Because that is what all girls do

The cliched comedy "Bride Wars" tosses out stereotypes about female materialism and cattiness with all the giddy gusto of a newly married woman flinging the bouquet at her single girlfriends.

It is amazing that two of the film's three writers are women: Casey Wilson of "Saturday Night Live" and June Diane Raphael, the third, Greg DePaul, also gets a story Ñ by credit.

But what is just as baffling is the way in which director Gary Winick, who brought the radiant best out of Jennifer Garner in the 2004 charmer "13 Going on 30," manages to squander the appealing screen presence of Kate Hudson and Anne Hathaway. Hudson and Hathaway star as Liv and Emma, lifelong best friends who have obsessively fantasized about the ideal wedding since they were children in small-town New Jersey. Because that is what all girls do, right? Lavish nuptials represent the zenith to which we all aspire.

Anyway, when Liv and Emma both get engaged within days of each other, they accidentally book their weddings at New York's Plaza Hotel on the same date. The conflict is the result of a snafu at the office of wedding planner extraordinaire Marion St. Claire, a tart Candice Bergen, whom Liv and Emma gush over during their first appointment as if they were 12-year-olds at a Jonas Brothers concert.

Game of sabotage
Despite promising to be each other's maid of honor, neither will budge, which leads to an increasingly destructive game of sabotage and one-upmanship. The speed and ease with which they turn on each other is dizzying and more painful to sit through than Hathaway's rehearsal-dinner toast in "Rachel Getting Married."

Emma, a normally passive schoolteacher, secretly sends Liv, a high-powered lawyer, chocolates and cookies so that she will be too tubby to squeeze into her Vera Wang gown with its 10 tiers of tulle. The smorgasbord of sweets leads to the movie's only true laugh-out-loud line. And it is such a relief when it comes. Liv, meanwhile, undermines one of Emma's spray-tan sessions and floats the rumor to their mutual girlfriends that Ñ oops! Ñ Emma may be pregnant. And on it goes.It is unabashedly mean, yes Ñ think of it as "The War of the Roses," and the peonies, and the hydrangeas Ñ but it is also never all that funny. And as this incredibly shallow dilemma is the biggest problem facing these women, it is impossible to root for them to be happy or care whether their friendship survives.

Neither could have picked another date or found another venue? In all of New York, really? But alas, then there would have been no movie.

The climactic battle reveals the absolute worst in both, as they rip each other apart in a screechy frenzy of hair and veils and silk. But then "Bride Wars" wants to have it both ways; besides parodying the wedding industry while simultaneously embracing it, the film wants to wallow in the muck and tug at our hearts. It features one of those awkward moments of confession, apology and reconciliation that always seem to take place in a room full of hundreds of people. Nobody ever steps out to a hallway for these talks. It is enough to make you wish Owen Wilson and Vince Vaughn would crash the party and liven things up.
False