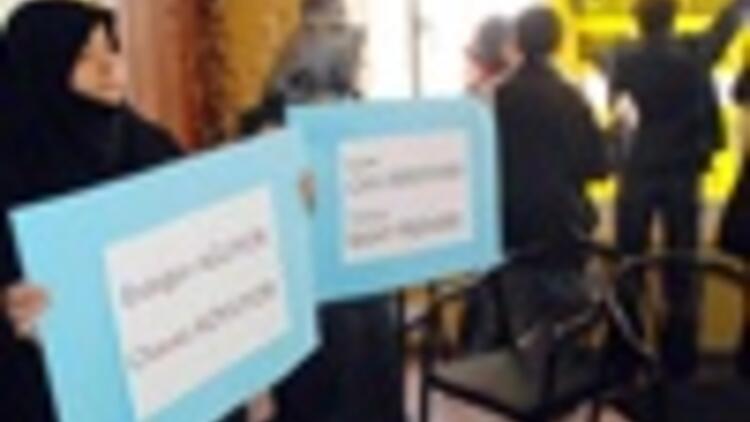 A group from a Turkish organization Friday barricaded themselves inside the offices of the ruling AKP in the southeastern province of Sanliurfa and demanded that the prime minister break ties with Israel.

Nearly 30 people, including women and children, from the Organization of Human Rights and Solidarity for Oppressed People (Mazlum-Der) locked themselves inside the building, Dogan News Agency reported.

The demonstrators chanted anti-Israel slogans and hung posters and banners inside and outside the offices. "We will remain here until relations with Israel are cut," and "(Turkish Prime Minister Tayyip) Erdogan is crying. (Venezuela's President Hugo) Chavez is sacking (Israeli ambassador)," some posters read.

"Damn collaborator leaders," the protestors shouted from the windows of the offices.

Venezuela on Wednesday broke diplomatic ties with Jewish state over its military offensive in the Gaza Strip and refusal to comply with international calls for a ceasefire, a week after it expelled the Israeli ambassador in Caracas.

Turkey, Israel’s main regional ally, is one of the countries that have condemned the Jewish state for its offensive on Gaza.

Erdogan, who has repeatedly criticized Israel, said Friday the Jewish state should be barred from the United Nations while it ignores the body’s calls to end the fighting in Gaza. However he has stopped short of deciding to suspend ties with Israel.